Corporations registered under the CATSI Act must submit their annual reports to ORIC within six months after their financial year ends. Reports for the 2013–14 financial year had to be lodged by most corporations by 31 December 2014.

In 2014–15 the highest number of corporations in ORIC’s history lodged their reports. From a total of 2400 [1] corporations required to submit reports, 2335 complied with their obligations under the CATSI Act.

In percentage terms, reporting compliance rose from 95.7 per cent last year to 97.3 per cent this year.

This is the sixth consecutive year that the Registrar’s target of 90 per cent reporting compliance has been exceeded.

Of the reports lodged, 59.3 per cent were submitted through the Registrar’s online lodgment system.

High compliance rates mean that members, communities, creditors and government agencies can have greater confidence in the information maintained by the Registrar on the public Register of Aboriginal and Torres Strait Islander Corporations.

As at 30 June 2015 there were 141 registered native title bodies corporate (RNTBCs) registered under the CATSI Act.[2] Of these 131 were required to report for the 2013–14 financial year and all were compliant.

In what’s become an annual cycle of communication and support to maintain high reporting compliance rates, ORIC carried out the following activities:

[2] RNTBCs are the corporations recognised by the Federal Court under the Native Title Act 1993 to hold and represent the native title interests of a particular group of people. They must be registered under the CATSI Act.

Note: On 2 March 2015 ORIC adopted a new model of 12 regions across Australia. 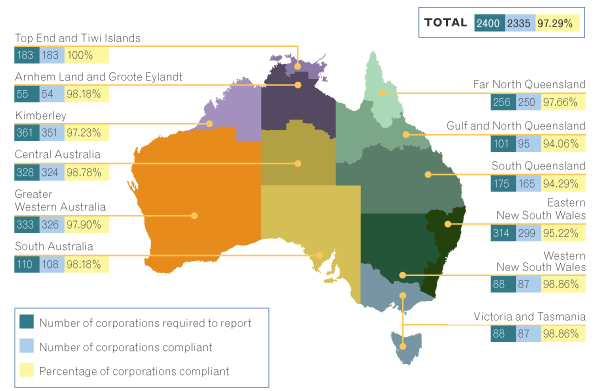 Consequences of not reporting

Corporations that don’t lodge reports by the reporting deadline may face prosecution. For most corporations this deadline is 31 December. During 2014–15, a total of 16 corporations were prosecuted for failing to lodge their 2013–14 reports. (see p. 41.)

The Registrar may deregister corporations that remain in longstanding
breach.

The accounting standards allow for auditors to apply a range of methods to present unexpended grants in a corporation’s financial statement. The Registrar’s guidance steers auditors to a preferred method to reduce the risk of future mis-statements for Aboriginal and Torres Strait Islander corporations funded by government.

The Registrar’s preferred method under AASB 1004 is that any unspent component of a grant or funding should be recognised as a deferred income component (i.e. a liability) in the corporation’s balance sheet.

More information on the Registrar’s preferred accounting treatment of government grants or funding may be found in the Corporation reporting guide at www.oric.gov.au

Increasing the pool of eligible accountants

On 3 November 2014 the Australian Government amended the CATSI Regulations to make it possible for members and fellows of the Institute of Public Accountants (IPA) to audit the financial reports of certain small and medium-size corporations.

The amendment brought the CATSI Regulations in line with other Commonwealth legislation which already recognise the IPA. It has also increased the pool of accountants who are eligible to audit financial reports for the majority of Aboriginal and Torres Strait Islander corporations.

A new paragraph has been inserted at subregulation 333-16.02(3) to give effect to the changes.

The Registrar initiated the amendment in order to give corporations greater choice for auditing services, particularly in remote and regional areas. The change, which was welcomed by the CEO of the IPA, Andrew Conway, should also lead to reduced auditing costs.

Minister for Indigenous Affairs, Senator the Hon. Nigel Scullion, signing the amendment to the CATSI Regulations in the Registrar’s office (22 Oct 2015).

ORIC provides a range of registration services to Aboriginal and Torres Strait Islander groups and corporations.

In 2014−15 ORIC received 8669 documents (including written inquiries) from corporations and the public—down from 8947 documents in the previous year.

The processing of documents or responses to inquiries was completed in an average time of 2.57 business days, which represents a slight improvement from last year (2.61 days).

The following table outlines ORIC’s registration and support services from 2011–12 to 2014–15.

Notes: *Of the 170 applications approved 11 were organisations transferring their registration from other incorporation legislation.

**Some services finalised during the financial year were initiated in the previous year.

Lodgment of forms and reports

The Electronic Register of Indigenous Corporations under the CATSI Act (ERICCA) is a database managed, maintained and updated by ORIC to help the Registrar administer the CATSI Act.

Corporations more than ever before are choosing to lodge their forms and reports online (rather than by hard copy through the post or by fax).

Using the ORIC online lodgment system at https://online.oric.gov.au makes updating corporation information and lodging forms easier because the system pre-populates forms using the latest information in the register. Corporations can simply update, add to or delete the information. 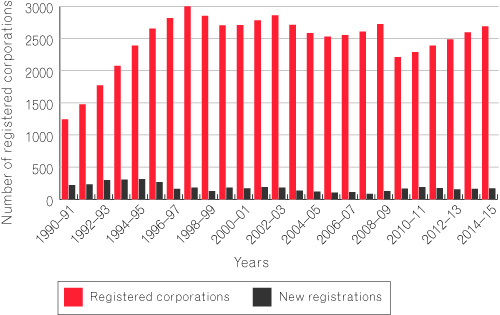 The Halls Creek Stolen Generations Group is made up of people and their descendants who were forcibly removed from their families under the Aborigines Act 1905 (Western Australia) and relocated to the Moola Boola settlement.

In March 2015 representatives from the group wanted to learn about forming a corporation as a way to assist their people (and their families).

‘I enjoy doorway workshops—they’re very useful,’ said Sid Michels.‘For one thing they’re informal—there’s no burden of expectation on the participants. I can explain the various benefits of registering under the CATSI Act in a way, and at a pace, that suits the group.’

A doorway workshop allows for discussion and for the group to ask as many questions as they like. The Halls Creek Stolen Generation Group was no exception.

‘It’s great when the group is so engaged and wants to know everything,’ said Sid. ‘I went through the steps involved in the registration process and the various support services ORIC offers. I also covered reporting requirements and showed the group how they might start drafting a corporation rule book.’

Before any group takes the plunge it’s important that they understand what incorporation under the CATSI Act really means. To help with this, the Registrar’s office offers a range of pre-incorporation services (see the ORIC website).

‘The Halls Creek Stolen Generation group hasn’t registered yet,’ said Sid, ‘but it’s not unusual that it takes a bit of time—there’s a lot to think about.’

From 1 July 2014 the Australian Government set a requirement that organisations receiving grants of $500,000 or more in a single financial year for funding administered by the Indigenous Affairs Group within PM&C must incorporate under Commonwealth legislation.

The reason for doing this is to improve public confidence in the security and delivery of programs those organisations are funded to deliver. Incorporation under Commonwealth legislation rather than state or territory legislation provides a more robust regulatory framework and access to specialist assistance to address governance issues.

During 2014–15, 11 organisations transferred their incorporation from other legislation to the CATSI Act.

The board of directors contacted ORIC’s Perth regional office because they were interested in the wider exposure and better support the CATSI Act could offer them. Perth regional manager, Arthur Hyde, began working with the association in April 2014.

‘We worked with the directors to give them an overview of the transfer process. We then helped them draft a CATSI Act rule book that captured the objectives and essential governance requirements of the new corporation,’ said ORIC’s Perth regional manager, Arthur Hyde.

‘It was important to capture the cultural and spiritual values; and other aspirational goals for the new corporation. This step required the ‘tick of approval’ from the association’s elders.’

The law firm Allens Linklaters also assisted in the process, particularly with the requirements of the WA Department of Commerce that administers the Associations Incorporation Act 1987.

The corporation is now making plans to take Arthur up on his offer for corporate governance training sometime next year. ORIC’s support doesn’t stop at registration.