The CATSI Act delivers modern corporate governance standards but still provides special measures to suit the needs of Aboriginal and Torres Strait Islander people. Some features unique to the CATSI Act include:

The Registrar offers guidance on interpreting legislation through policy statements which are available at www.oric.gov.au. These statements inform corporations, their directors and members, as well as the general public about:

It is a requirement that registered native title bodies corporate are recognised by the Federal Court under the Native Title Act.

The CATSI Act makes sure that requirements imposed on a corporation or individual by native title legislation do not conflict with obligations under the CATSI Act.

The Registrar provides a range of information on how the different legislation interacts, policy reasons for the legislation, policy statements on how the Registrar manages certain native title issues and a guide for writing good governance rules. All these resources are available from www.oric.gov.au.

During 2014–15 the Registrar presented at several meetings hosted by native title service providers and at the National Native Title Conference (see p. 82). He also met with the Expert Indigenous Working Group on native title established by the Minister for Indigenous Affairs, Senator the Hon. Nigel Scullion, to assist the Council of Australian Governments’ investigation into Indigenous land administration and use. 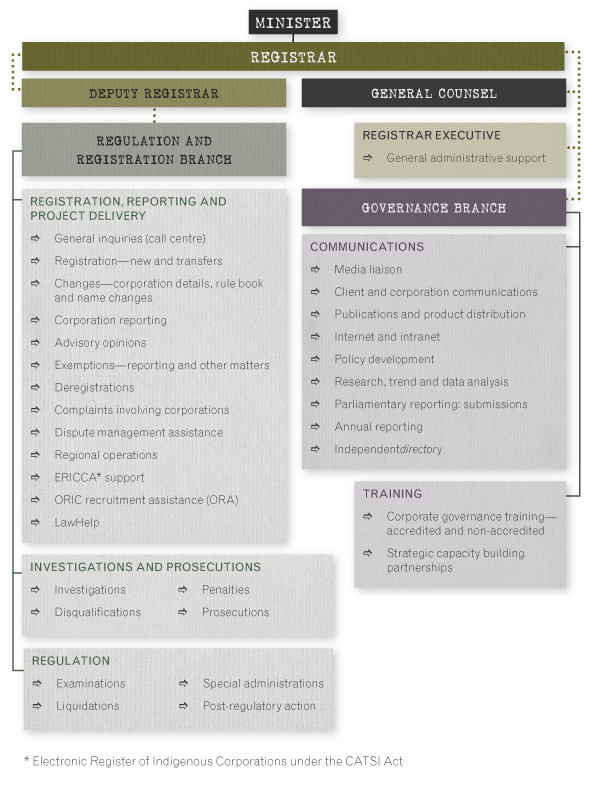 The Registrar and senior management as at 30 June 2015

The Registrar’s work was carried out by 46.7 full-time equivalent staff as at 30 June 2015. There were 27 female and 23 male staff members. ORIC had eight part-time staff, two staff on long-term leave and 40.8 per cent of staff identified as Aboriginal or Torres Strait Islander—an increase of 1.2 per cent from 30 June 2014.

The National Sorry Day Bridge Walk across Commonwealth Avenue Bridge, Canberra, took place on 22 May 2015. This annual event is a coming together of people wishing to share the steps towards healing of the Stolen Generations, their families and communities. Despite the cold weather this year’s walk was the most successful to date in terms of turnout. The Registrar’s office was represented by a number of staff.

One of the winners of the competition, announced on 1 July 2015, was ORIC’s Alice Springs regional manager, Dayna Lister, for her piece, Desert wildflowers. Dayna’s painting will be used on the cover of the DAP and also within the Aboriginal and Torres Strait Islander Employment Strategy.

Just as in every other year, ORIC staff participated in NAIDOC week events and celebrations (5−12 July 2015). This year’s theme was ‘We all stand on sacred ground’.

A number of staff took part in a mix of activities, including:

Kenneth (Ken) Wanganeen (1948–90) joined the Office of the Commonwealth Public Service Board in Canberra as an administrative trainee in 1973. Eight years later he was the Deputy Registrar of Aboriginal Corporations (1981–82, 1984) and, sometime in the middle of 1987, the acting Registrar. This former student activist and honours graduate from Flinders University, Adelaide, was a man of great integrity and talent. His ancestors were the Narungga people of Yorke Peninsula although the family believe his great-great-grandfather, James Wanganeen, was from the Murray River region of South Australia.

Gerrit Wanganeen, Ken’s son, joined the Australian Public Service Commission in 1997 as a graduate with a Bachelor of Arts degree in sports administration. In early 2013 he came to ORIC, initially on a six-month secondment, to take on a change management role while the office underwent an organisational review and restructure. This subsequently led to Gerrit implementing the Registrar’s plan to decentralise ORIC and spread out to the regions. There is no question that Gerrit Wanganeen, with his patience and persuasive temperament, was fundamental to the success of the organisational restructure and the roll out of ORIC’s regional network. In 2014 Gerrit accepted an ongoing position at ORIC and in February 2015 won a permanent promotion to Section Manager, Registration, Reporting and Project Delivery.

In June 2015 Gerrit followed in his father’s footsteps when he was appointed as a Deputy Registrar for two weeks.

Like his father before him who played Australian Rules Football for and was President of the Flinders University Football Club, Gerrit Wanganeen is a talented sportsman. He plays Australian Rules for the Tuggeranong Hawks, has served on its board and committees, and in 2014–15 was the manager for the NSW/ACT Indigenous under-15 team at the National KickStart Championships. In June 2015 he was nominated by his club and later selected to play for the All Stars in the EJ Whitten Legends Game at the Etihad Stadium.

All those who knew Ken Wanganeen respected him as a ‘great leader who committed his life to being a bridge and healer between two cultures’. In 2006 Flinders University honoured him by establishing the Ken Wanganeen medal and in 2001 the Australian National University established the Ken Wanganeen scholarship. These are large shoes to fill but Gerrit shows every sign that he can do just that—both through his dedicated support of Aboriginal and Torres Strait Islander corporations and through his tremendous contribution to Indigenous sport. It is very much a case of father like son.