The Registrar increased reporting compliance from 52.0 per cent in 2006–07 to 97.1 per cent in 2015–16 by providing targeted assistance to corporations and through ORIC’s prosecution programs.

Improved compliance has significantly increased the accuracy and reliability of the free public Register of Aboriginal and Torres Strait Islander Corporations.

It’s a requirement under the CATSI Act that corporations lodge their annual reports with the Registrar’s office within six months after the end of their financial year. For most corporations this means that their reports for the 2014–15 financial year had to be lodged by 31 December 2015.

Reporting requirements vary according to the registered size of a corporation—large, medium or small—and its income.

In 2015–16 the highest number of corporations in ORIC’s history lodged their reports. From a total of 2509 [1] corporations required to submit reports, 2436 complied with their obligations under the CATSI Act.

For the past six years reporting compliance has exceeded 95 per cent.

Of the reports lodged, 66.5 per cent were submitted through the Registrar’s online lodgment system. This represents a 7.2 per cent increase from last year in the number of reports submitted online.

As at 30 June 2016 there were 156 registered native title bodies corporate (RNTBCs) registered under the CATSI Act, as required by the Native Title Act 1993. Of these 144 were required to report for the 2014–15 financial year, only one failed to do so, producing an overall compliance rate of 99.3 per cent.

Maintaining high compliance rates is important because high compliance gives members, communities, creditors and government agencies confidence that information maintained by the Registrar on the public Register of Aboriginal and Torres Strait Islander Corporations is accurate and up to date.

To retain high reporting compliance rates, the Registrar’s office conducts an annual communication and support program to encourage easy contact with corporations and to assist them as needed. Similar to last year, activities in 2015–16 included: 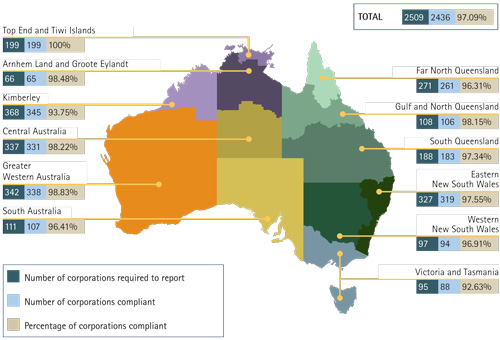 Consequences of not reporting

Corporations that don’t lodge their annual reports by the reporting deadline know that they risk prosecution. The Registrar has ensured that corporations are aware of this fact.

As stated earlier, 31 December is the deadline for most corporations. During 2015–16, the Registrar finalised prosecutions against 16 corporations for failing to lodge their reports by the required time (see ‘Investigations and prosecutions’ on page 33).

The Registrar has the power to deregister certain corporations that remain in longstanding breach.

The Registrar produces guides, booklets and brochures to help corporations interpret the CATSI Act, comply with their reporting requirements and to understand their corporate governance obligations. Some examples:

ORIC provides a range of registration services to Aboriginal and Torres Strait Islander groups and corporations.

In 2015−16 ORIC received 9473 documents (including written inquiries) from corporations and the public—up from 8669 documents in the previous year (representing a 9.3 per cent increase).

The processing of documents or responses to inquiries was completed in an average time of 2.75 business days (compared to 2.57 business days last year). This is a very reasonable turnaround time, especially with the increase in the number of documents received this year (as measured against last year). 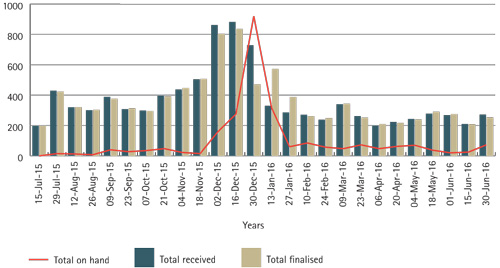 *Of the 177 applications approved 25 were organisations transferring their registration from other jurisdictions (of the 170 approved in 2014–15, 11 organisations were transfers).
**Some services finalised during the financial year were initiated in the previous year.

Lodgment of forms and reports online

Each year an increasing number of corporations choose to lodge their forms and reports online (rather than by hard copy through the post or by fax).

ORIC’s online lodgment system at https://online.oric.gov.au is simple to use. Furthermore, corporations are now finding that updating their corporation’s information is much easier. This is because the system is able to pre-populate forms by extracting the latest information from the public register. Corporations can simply update or add information, or delete information that is out of date, as required. 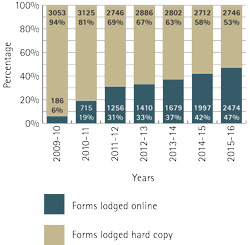 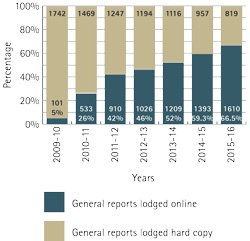 ORIC manages, maintains and updates ERICCA (Electronic Register of Indigenous Corporations under the CATSI Act), which is a database that helps the Registrar to administer the CATSI Act.

ERICCA includes two public registers which are accessible from the ORIC website—
the Register of Aboriginal and Torres Strait Islander Corporations and the Register of Disqualified Officers. Information held in ERICCA is also used to prepopulate a range of forms within ORIC online lodgment system. 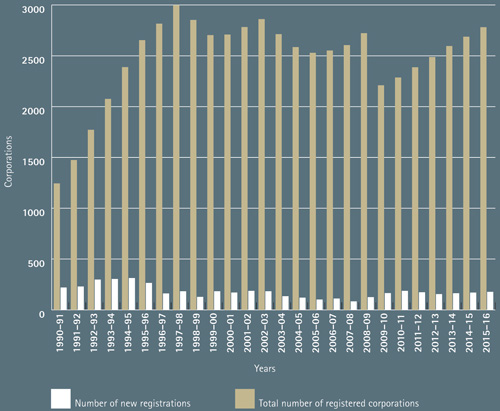 Table 5: Registered corporations by region as at 30 June 2016

The Australian Government decided that, as from 1 July 2014, organisations receiving grants of $500,000 or more in a single financial year for funding administered by the Indigenous Affairs Group within PM&C, must incorporate under Commonwealth legislation.

This change was made to improve public confidence in the security and delivery of programs by organisations funded by the Australian Government. Incorporation under Commonwealth legislation, rather than state or territory legislation, provides a more robust regulatory framework and access to specialist assistance to address governance issues.

To help in the implementation of this policy, the Registrar has devoted extra resources to assist organisations to transfer to the CATSI Act.

As at 30 June 2016 ORIC had dealt with 147 requests for assistance to transfer to the CATSI Act. In addition, the guidelines for the Registrar’s pro bono legal service, LawHelp, were expanded so that organisations seeking legal advice before transferring to the CATSI Act, were eligible to seek that advice through LawHelp.