It started 25 years ago on the back of a $100 donation. A group of concerned local Aboriginal volunteers got together to establish a corporation. The aim was to help provide affordable housing for the local community. A quarter of a century later, Winnam is a thriving concern with over $22 million in assets.

Brisbane, Queensland: ‘All of us already had our own homes and so it was upsetting to hear regular stories about community members having a hard time finding a place to rent. It just didn’t seem fair,’ said Winnam’s chairperson, Becky Thomson. ‘So we decided to do something about it. It was and never has been about us. It has always been about our community.’

Winnam Aboriginal and Torres Strait Islanders Corporation provides mainly housing and aged-care services. Its clients are Aboriginal and Torres Strait Islander people from all areas of the community and interstate but most come from the eastern Brisbane suburbs of Wynnum, Morningside and Bayside—part of Quandamooka country where the pandanus palm once grew in abundance.

In fact, Winnam takes its name from the Aboriginal word for pandanus palm.

The corporation’s motto ‘keeping our people together’ is well known to members and refers to Winnam’s connection to the community and to the bayside area. Its principal purpose is providing a network of support and a meeting place for local Aboriginal and Torres Strait Islander people.

Winnam is a 100 per cent community-based, not-for-profit corporation. It uses all its income to extend or improve services for local people—or, put another way, in fully pursuing its objectives. This fact is reinforced in the corporation’s rule book which clearly states that neither members nor directors are permitted to receive any financial gain from the corporation.

Winnam’s 2014–15 financial reports indicate that it received $2.6 million in revenue and had only $66,389 left after meeting all of its expenses in providing services.

The corporation was incorporated in 1990 by local Aboriginal volunteers under the Aboriginal Councils and Associations Act 1976. Early in the piece the Aboriginal and Torres Strait Islander Commission provided funding to purchase a few properties. These properties were, and still are, used to shelter vulnerable Indigenous people. Then as now, Winnam is a safe and trusted backstop for people in the community who face economic and social hardship, such as unstable employment, low income and discrimination from unscrupulous landlords.

Accommodation is offered to tenants at low rents which generate a very small income for the corporation. However, what comes in is well controlled and covers service costs and the upkeep of the properties—maintenance and repairs, rates, insurance and administration.

On the aged care side, the corporation has been funded for many years by the Queensland Department of Health and Ageing to manage the Georgina Margaret Davidson Thompson Hostel (known as Georgina Hostel) in Morningside. Although Georgina Hostel is open to everyone—Indigenous and non-Indigenous—it’s the only residential aged-care facility in Brisbane that caters specifically for Aboriginal and Torres Strait Islander people. Any funds it generates, such as through residency fees, are immediately funnelled back into the hostel’s administration and maintenance.

At an event four years ago, celebrating Winnam’s 21 years of dedicated service to aged care, the deeds to the hostel were handed over to the corporation—a large statement of trust. 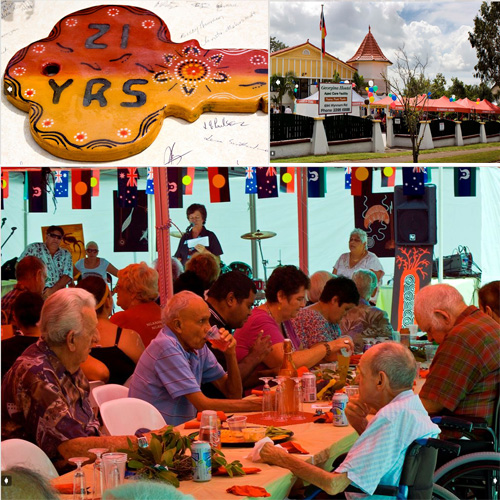 But services provided by Winnam don’t stop at affordable housing and aged care. The corporation also runs all kinds of events for the community, including cultural activities for non‑Indigenous people. In addition Winnam is for many Aboriginal and Torres Strait Islander people the first place they contact for advice and support. They know they’ll receive guidance in any number of areas, from social justice issues to referrals for employment or accommodation.

And if that’s not enough Winnam runs an art shop too—to showcase local talent and to sell a variety of arts and crafts, from paintings and prints to boomerangs, didgeridoos and many other unique items.

‘I’m often asked what’s the secret to Winnam’s success and longevity,’ said Becky Thomson ‘I have to say there is no secret but we have always had a strong and very good team at the helm, which has a lot to do with it.’

In all the years Winnam has been operating it has had only 30 directors.

Everyone at the corporation loves what they do and believes in the work. But the reality is it will soon be time to hand on to the next generation. ‘We’re entering a new phase now,’ said Becky. ‘We’re looking to bring younger people onto our board who no doubt will bring new ideas and innovations to the workings of the organisation.’

Change is embraced—just so that whoever follows truly understands Winnam’s vision and is strong in their heart.

‘It doesn’t matter how we work … what matters most is that we work together and never lose sight of the clients,’ said director Denise Adams. ‘Winnam is full of people quietly going about helping—that’s our job—helping—it just happens.’

That’s the Winnam way. It’s all about helping people and ‘keeping together’. 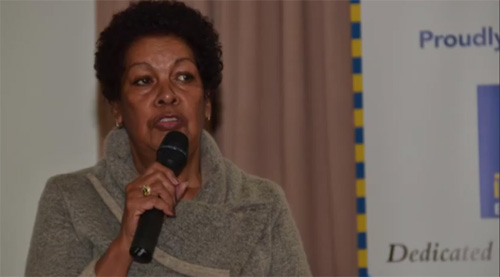 In July 2016 Winnam celebrated 25 years of operation. ‘I am very proud and privileged to be one of three women who are founding board members,’ said Becky Thomson. 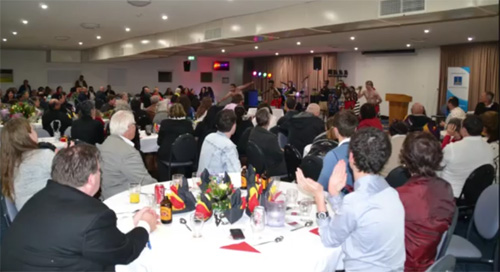 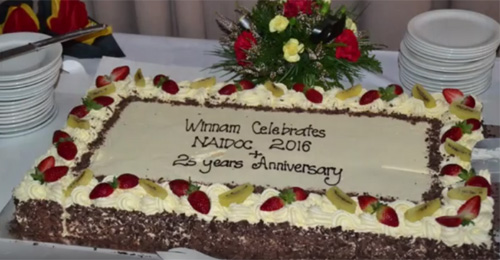 Speeches, entertainment and delicious food were all part of the 25 year anniversary celebrations 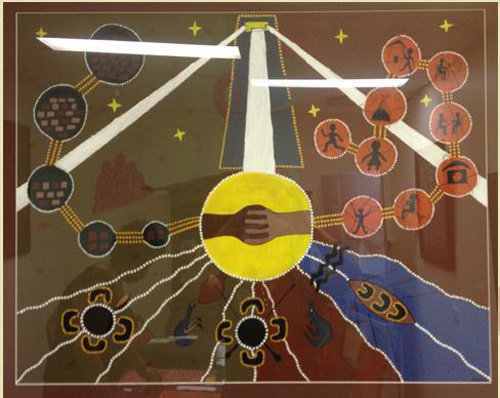 The painting on the boardroom wall illustrates Winnam’s vision statement—to support Aboriginal and Torres Strait Islander people to live healthy and happy lives in the community. It constantly inspires the board to keep on improving Winnam’s services. 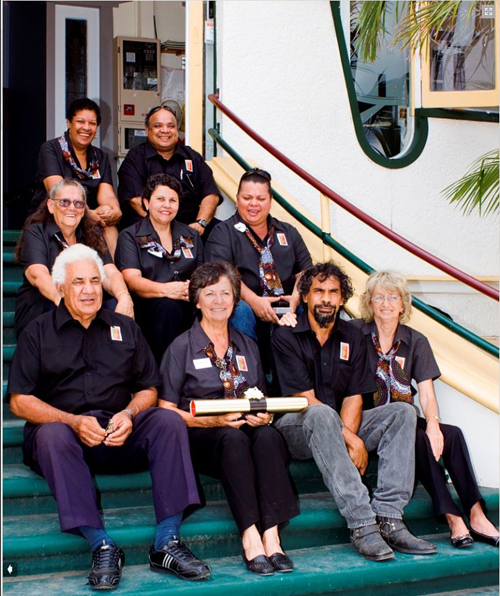 The Winnam board members set out the strategic plan and communicate it to the corporation’s senior staff. ‘The relationship is very good,’ said Becky Thomson. ‘The staff do a fantastic job in bringing our vision to life.’