Over this time the community-controlled, not-for-profit medical centre has consistently provided quality healthcare services. ‘We’re a close-knit team and we do the very best we can for our patients and clients,’ said the corporation’s secretary, Warren Mason.

The Werin board of directors and Werin team celebrate 10 years of dedicated service and ‘independence’ along with Leslie Williams MP (state Parliament) and Luke Hartsuyker MP (federal Parliament).

The project came out of a recent RDN health survey that found close to 10 per cent of Aboriginal children across the state were suffering from treatable hearing problems, compared to only three per cent among non-Aboriginal children.

‘This is not acceptable,’ said Fay Adamson, Werin’s CEO. ‘We have to reduce the incidence of hearing loss and give these children a better start in life.’

And this is exactly what Werin Aboriginal Corporation is doing. Children can now attend regular ear, nose and throat (ENT) clinics at its medical centre as well as special surgical clinics at the Port Macquarie Base Hospital.

Children who don’t receive medical treatment early enough to correct a hearing loss are placed at a serious disadvantage, sometimes for the rest of their lives.

‘If they don't have the surgery their hearing decreases, and it becomes very hard for them to manage in a classroom,’ said Dr Cameron from the RDN. ‘Then of course their education suffers and they are much more likely not to advance as much as they would like, and then that can lead to behavioural issues.’

Someone clearly benefiting from the joint program is eight-year-old Cordell Scott. His mum Sonia said her son has always had ear problems.

‘By the time he was three years old he had suffered with a lot of ear infections,’ Sonia said. ‘And his speech was a little bit affected. We couldn't understand him very well and his elder brother Darnell would do all the talking for him.’

Cordell’s initial problems were caused by fluid build-up behind his ear drums, which was corrected by having grommets inserted—but only temporarily. It soon became evident that Cordell needed further surgery to insert more grommets and to have his adenoids and tonsils removed.

Without the RDN program in place Cordell would have had to sit on a waiting list for 12 months or so. This is a long time for a young boy needing surgery.

‘We might have had to investigate the possibility of getting him hearing aids because of the level of hearing loss in both ears,’ said Sonia.

But fortunately hearing aids weren’t necessary—Cordell had the surgery through Werin and the RDN and, as a result, his hearing is much improved.

And now that Cordell can hear better he’s naturally grown in confidence.  He’s a typical happy eight-year-old who ‘loves all sport and is a bit of an all-rounder’.

Cordell’s family is one of many that want to thank the Werin Aboriginal Corporation medical centre and the New South Wales RDN (especially Dr Curotta).

There are more stories just like this which is a good reason to wish Werin a very happy birthday and all best for the next 10 years! 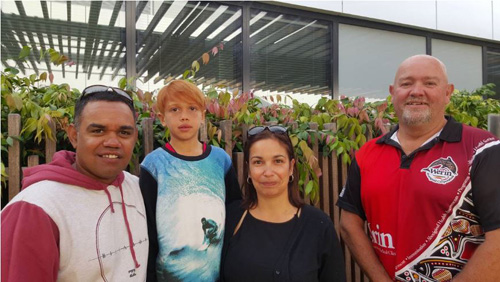