Bumma Bippera Media Aboriginal and Torres Strait Islanders Corporation (BBM) is the first and only Indigenous radio and media service in Cairns. They were granted a full-time community radio licence in April 1999. The station offers a range of programs, from arts to news and current affairs. Bumma Bippera means ‘People Talking’ in the Yidinji language.

BBM is situated in Bungalow, a 3-minute drive from Cairns. Coverage for BBM 98.7 extends from as far south as Gordonvale, west to Kuranda, Atherton and Mareeba, north to Port Douglas and Mossman, east to Yarrabah and the Cairns area. The station has a potential reach of 150 000 people daily. BBM is particularly proud of their national talkback program TalkBlack via the National Indigenous Radio Station (NIRS), a popular program that keeps the community up to date with current issues that affect communities across the country.

BBM is also now functioning as the ‘northern campus’ for training provided to community members and school-based apprentices through the Brisbane Indigenous Media Association (BIMA) and Triple A Training.

BBM has an arrangement with Triple A Training to provide training for apprentices in the Cape York area. One of the success stories is the formation of BBM’s Cadet Corps—a generic term that includes school-based apprentices, school leavers and volunteers.

The newly established Cadet Corps is a successful training opportunity for up and coming young Indigenous broadcasters/journalists, who play an important role in the day-to-day operations of the station.

Training is held at the studios of BBM and also on the road at various outdoor broadcasting events in the community.

Drew Holloway (photo below left) after completing his Certificate III in media through Triple A Training, Drew now hosts ‘Dial a hit with Drew and the Crew’. Drew is part of the National Job Package Funding through the Office for the Arts, Department of the Prime Minister and Cabinet.

Bennie Rea (photo below right) after undergoing BBM’s trainee program, Bennie is now senior broadcaster and host of the ‘Brekky Show with Bennie’. BBM is funded by the Office for the Arts Department of the Prime Minister and Cabinet. 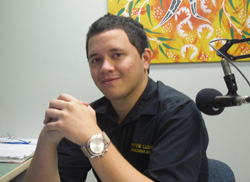 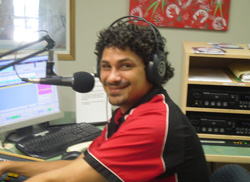