Coen, Queensland: The Lama Lama traditional owners living in Coen and Port Stewart are the driving force behind Yintjingga Aboriginal Corporation. Since they established this homeland-based, not-for-profit organisation in 2009, Yintjingga has grown in significance and reputation.

Through a number of well-thought-out programs designed to lift living standards, preserve culture, and protect country, Yintjingga is achieving exactly what it has set out to do.

The widely known and respected Lama Lama rangers program, for example, is a stand-out achievement.

Members of the Lama Lama rangers prove their commitment to the future by holding down paid jobs while at the same time learning important new skills, such as how to look after country and to become happy and productive members of the community.

‘Some of the responsibilities they learn at the beginning include getting to work on time, following the work schedule and checking the roster,’ says Yintjingga’s chairperson, Gavin Bassani. ‘They learn how to work as a team—how to help each other and keep each other informed. These are important life skills before they even start on the technical side.’

Gavin Bassini is very proud of Yintjingga’s young rangers, especially those new to the program who are progressing well with their Certificate III in Conservation and Land Management.

And it’s great to see how ranger work has moved with the times. When out in the field rangers now use a new tablet-based recording system which links to one central database. The corporation stores in this all its cultural as well as ranger land management information.

The area of land and sea that Yintjingga protects extends from the Massey River in the north, the bottom of the Great Dividing Range in the west, the top end of the Lakefield National Park in the south and east to the offshore islands within Princess Charlotte Bay. This area covers approximately 300,000 hectares of property and it’s a full time job to monitor, protect and conserve.

A project on a slightly smaller scale but which is gathering pace is a recycling venture with Tangaroa Blue Foundation in Cape York. Called the Australian Marine Debris Initiative—or AMDI—materials, such as plastic bottles and aluminium cans, littering the coastline, are collected from communities, baled up for easy transport, and sent to a plant for breaking down. From the resulting material something new is made.

‘The great thing about this project is that our environment is cleared of debris, particularly our waterways, and what otherwise would be rubbish destined for landfill is turned into something useful,’ says Gavin Bassani. ‘The idea of using a resource over and over again is very appealing to our values—land and sea care, culture, social cohesion and economic development.’

The community is playing its part by placing recyclable bottles and cans into two big silo bags set up at the ranger base in Port Stewart. People are also invited to pop into the Lama Lama ranger office to talk about this and other projects.

As part of bringing on the next generation of rangers and as part of the Lama Lama TUMRA Cultural Heritage program, a group of children went out for the day to Grubb Reef. On the way there aboard the Lama Lama charter boat the junior rangers observed marine animals in the mangroves and were delighted when a pod of dolphins were spotted swimming towards them! After lunch the party made its way to the sand bar where the children swam in beautiful clear water, went diving for crayfish or tried their luck at spearing in the shallows!

On the social side there’s much to report too. Houses have been repaired and renovated thanks to family contributions and funds from the corporation. Yintjingga has also attended to matters such as insurance. Once government funding was available to cover housing and other infrastructure needs on Lama Lama country but this is no longer the case. Now it’s a community responsibility.

As a result rangers and other family members, since 2012, have been paying into a housing fund dedicated to maintaining the houses in good condition. The fund has grown to the point that it is now possible to buy white goods—such as fans, fridges and washing machines—as well as to put in gas supplies to all the houses.

‘The housing fund is a great way for everyone to save and contribute towards the upkeep of the houses,’ says Alison Liddy, Admin Officer and traditional owner. ‘It’s good for everyone—it means we can all enjoy an improved standard of living and feel safe.’

‘Our vision is to be standing on country together as one Lama Lama community. We are strong families. Proud of who we are. Confident in who we are. Proud of one another.’ 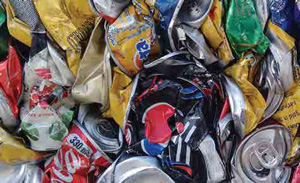 'It’s no longer necessary to send cans to landfill for burying and burning which can cause contamination in the air and soil. By recycling we are looking after country,’ says Cheryl Prestipino, Executive Officer. 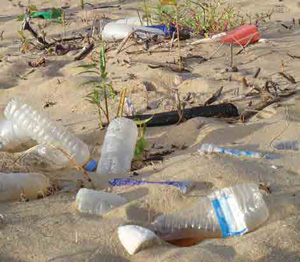 ‘Recycling reduces the amount of litter on our saltwater country and therefore helps us to look after it well,’ says Elaine Liddy, Cultural Advisor and traditional owner. 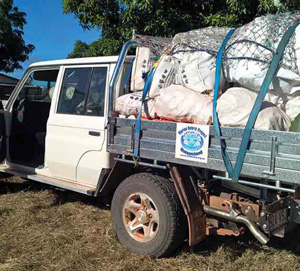 Tangaroa Blue has been coming to Lama Lama country since 2013. 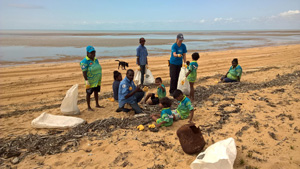 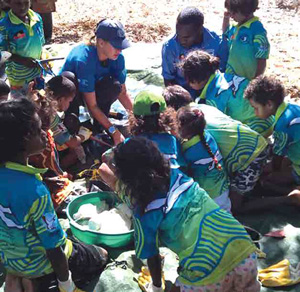 One Mile beach looked so good after the clean-up which was a great collaboration between Lama Lama people and Tangaroa Blue.

The visit with junior Lama Lama rangers to Grubb Reef was a huge success.