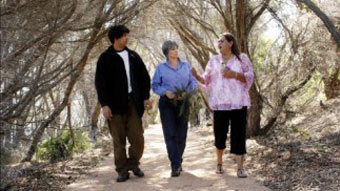 Yarra Bay, Sydney: The area around La Perouse where the old mission once stood is steeped in Aboriginal history. Thousands of years ago Aboriginal people camped in this place. Seafood was plentiful and bush tucker was easy to find.

The Aboriginal mission was established around 1885 but during the depression years, from the late 1920s, many unemployed white people moved into the area, drawn by the good fishing and the advantages of the natural landscape. In the 1940s and 50s they were followed by the ‘new Australians’ from Poland, the Ukraine,  Malta and other countries who had jobs but were homeless because of a housing shortage in Sydney.

Yet, despite the ups and downs and changing eras, the area has always held firm to its Aboriginal identity. La Perouse today holds the distinction of being the only Sydney suburb in which Aboriginal people have kept their territory in an unbroken line from the time of settlement. Its history is one of strength and survival of culture in the face of adversity.

In recent years the members of Guriwal Aborginal Corporation have reaffirmed this cultural heritage, particularly around Yarra Bay. Since 2008, with help from volunteers and support from Randwick City Council, they have carried out research on hundreds of local native plants. Knowledge has been gathered and carefully recorded about which plants are good to eat, which are used for medicines, and which are best for craft making.

The culmination of this hard work is the establishment of a bush tucker trail which was officially opened earlier this year in national reconciliation week.

On many levels it’s been an important project not least because it enables the passing on of traditional knowledge. It also creates opportunities for economic development for the local people through guided tours and bush tucker catering. Further, it informs the wider community about Aboriginal culture, ingenuity and know-how.

‘I see the trail as an outdoor showcase of Aboriginal knowledge and information about local plants used for bush tucker, medicines and crafts,’ says Barbara Keeley, a Bidjigal elder who grew up at the La Perouse Mission and who is now an active member of Guriwal Aboriginal Corporation. 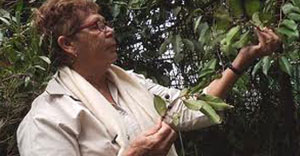 Mrs Keeley remembers a childhood poor in material comforts but rich in culture. Today she is passing on to other generations and visitors alike, knowledge about traditional bush foods and medicines handed down to her by her mother. ‘My mother was a strong woman and a survivor.’

The bush tucker trail is a delightful scenic walk through she-oaks and banksias that every so often is interrupted by hand-carved signposts depicting local plant species, fish and turtles.

The trail is undoubtedly an important educational resource not only for school children and specialists but also for the general public. It is a piece of Aboriginal traditional culture that everyone can share, thanks to the efforts of Guriwal Aboriginal Corporation.

The bush tucker trail is part of the Sydney Coastal Walk that extends some 200 kilometres. 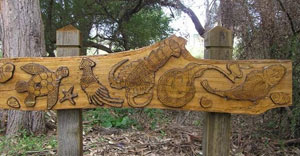 End note: Guriwal Aboriginal Corporation was incorporated under the Corporations (Aboriginal and Torres Strait Islander) Act 2006 in 1993. The establishment of the bush tucker trail demonstrates the corporation’s commitment to its objectives which includes the aim of developing opportunities to reduce the high level of unemployment in the community.

Top: On the bush tucker trail (from left to right) corporation member Peter Cooley, Randwick City Council bushland supervisor Bettina Digby, and director and community officer for Guriwal  Aboriginal Corporation Gail Cooke.
Second: Barbara Keeley is a Bidjigal elder who grew up at the La Perouse Mission. Much of the knowledge that Mrs Keeley is now passing on to others was learnt from her mother.
Bottom: Sea tucker carving—one of eight carvings along the bush tucker trail. Guriwal Aboriginal Corporation contracted Christopher Lyons, a local Aboriginal artist, to teach students from Matraville Sports High School the techniques of wood carving and burning. Their combined work resulted in this carving depicting local food from the sea.