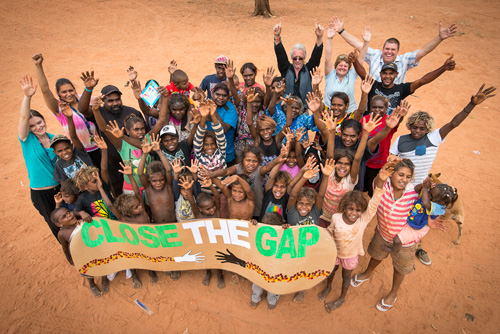 The story of Paupiyala Tjarutja Aboriginal Corporation (PTAC) and its members is one of remarkable survival. Located in Tjuntjuntjara, it is arguably one of Australia’s remotest Aboriginal communities.

PTAC is located in the Menzies region of Western Australia, 660 km north-east of Kalgoorlie in the Great Victoria Desert. The Tjuntjuntjara community members are part of a larger group known as the ‘Spinifex people’, who were removed from their homelands before the British atomic testing at Maralinga in the 1950s and 1960s.

In the early 1980s a group of Spinifex people decided to return to their homelands. There was virtually nothing in Tjuntjuntjara and the community had to do most things off their own bat. A school was set up, a store operated out of the back of a truck and a little clinic was set up.

After 25 years, things are looking quite different for this community and there is much to celebrate.

PTAC was established in 1989 as the governing body for the Spinifex people—a proud and dynamic traditional Aboriginal group. The corporation was also established so that the Spinifex people could receive and administer funds to develop infrastructure at Tjuntjuntjara. Since then PTAC has grown and added to the services they provide to the community, such as the health service, the Tjuntjuntjara community store, the women's centre, the Tjuntjuntjara community resource centre and a range of other programs and infrastructure- related projects. PTAC also acts as a local council service provider—managing the Remote Jobs and Communities Program, Community Development Employment Projects program and NJCP programs, water, power, sewerage and an environmental health program.

PTAC takes the health of its community very seriously. In March this year on Closing the Gap day, PTAC held a number of health-oriented events to commemorate the day. The Tjuntjuntjara Remote Community School also participated and the parents of the pupils were invited to come and look at the work the kids have been doing relating to health, literacy and numeracy.

Figures compiled by Outback Stores, a company operating retail stores in remote Indigenous communities, show that spending on fruit and vegetables in Tjuntjuntjara is twice that of 33 other Indigenous communities. This corroborates data from the Spinifex Health Service which shows that obesity in the community is lower than the national average for Indigenous people. In fact, body mass index (BMI) is 10 per cent lower than the national average and 20 per cent lower than other Aboriginal communities. This can be attributed to the strong nutrition policy the community developed for the store in the late 90s which includes initiatives such as No School—No Store, no junk food, no takeaway food, subsidised fruit and vegetables and the ban of sugary soft drinks to children under the age of 16.

A lot of credit goes to the leaders and elders in the community for setting a strong leadership example with their hard work and dedication. Tjuntjuntjara is an alcohol-free community where substance abuse and petrol sniffing are rare and there is little need for policing in the community. It is generally a quiet place where people feel safe.

A key community priority is to maintain traditional culture while preparing the children for a rapidly changing world. The local Tjuntjuntjara remote community school offers a broad curriculum with a strong focus on learning English as a second language through the use of Aboriginal literacy strategies. The main language spoken in Tjuntjuntjara is Pitjantjatjara followed by English.

It is therefore no surprise that culture is high on the priority list. The school has just received funding from the Federal Government. The $26,000 in funding is for a project to produce ten short films in the Pitjantjatjara dialect. This is a great opportunity to preserve culture through language.

CEO, Fiona Pemberton and Josie McArthur, chairperson are unanimous when they say:

'PTAC’s greatest strength lies with its people—the community and staff. The elders have provided strong leadership to both the community and staff; and this has set the basis for strong community governance. With staff and the board working collaboratively across the different services areas, developing programs from the ground up, we have seen some really positive results in terms of engagement and improved health and education outcomes. I think the key to successful communities is strong leadership, strong governance and applying a collaborative approach to resolving issues.' 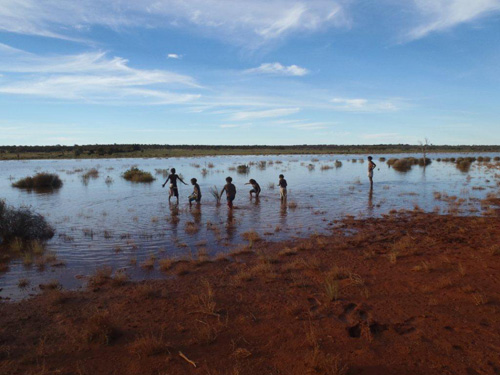 Kids during the floods in 2011 (photographer: Fiona Pemberton)

Carpet of Sturt Desert Pea on the road to Kalgoorlie (photographer: Fiona Pemberton)