Heywood, south-west Victoria: Budj Bim Cultural Landscape is an ancient and still-functional aquaculture system for catching, storing and harvesting short-finned eels and other fish. In July 2019 it was inscribed on the UNESCO World Heritage list, the first Australian landscape to be included for its cultural values. It was a thrilling watershed moment for Gunditj Mirring Traditional Owners Aboriginal Corporation (GMTOAC)—the culmination of 30 years’ work, and the beginning of a new era for the corporation. 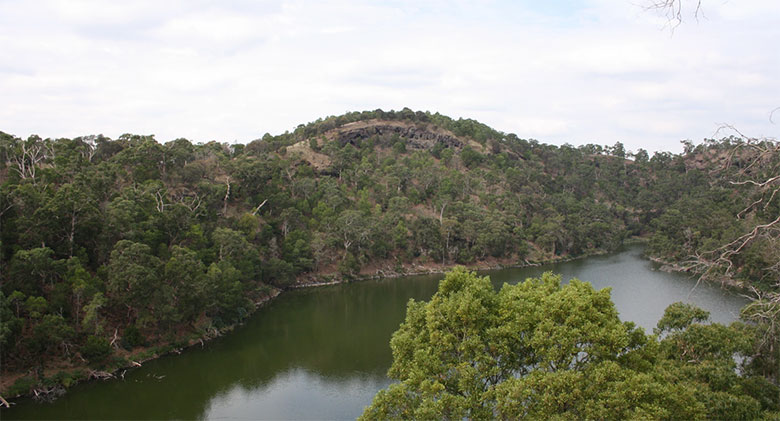 Budj Bim peak, in the national park named after it

When the Budj Bim volcano erupted 37,000 years ago, the Gunditjmara witnessed an ancestral creation being revealing himself. The lava flow extended over 50 kilometres, changed the drainage system in the area and created large wetlands. Around 6600 years ago, Gunditjmara people started using the volcanic rocks—Budj Bim’s teeth—to build ponds to hold the water, and channels to control its flow in and out.

The system was engineered to ensure a plentiful supply of short-finned eels and other fish to support a settled community. Large woven baskets enabled the harvesting of mature eels. Gunditjmara ancestors also used the teeth to build stone houses throughout the area. 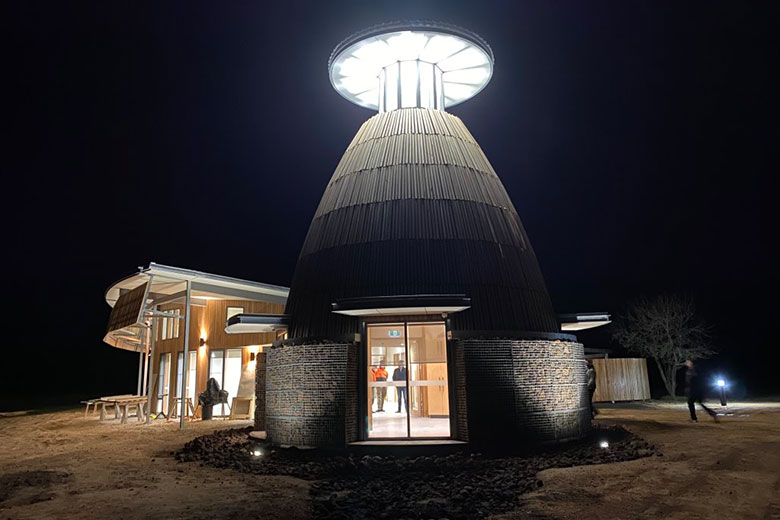 Just-built keeping place at the site of the old Lake Condah Mission, modeled on the circular stone houses of Gunditjmara ancestors, which used Budj Bim teeth for the base wall, timber for framing a domed roof, and sods, reeds and bark for cladding and waterproofing.

Gunditjmara people have been vigorously defending the environmental and cultural values of their country for decades. In 1981, Sandra Onus and Christina Saunders (nee Frankland) took legal action to prevent a proposed aluminium smelter from damaging Gunditjmara cultural sites. They persisted as far as the High Court, where the chief justice agreed that they had rights as traditional owners. A decade before the Mabo decision, this action it led to the Victorian government handing back land and property to the traditional owners, restoring water to Lake Condah and reserving more land for cultural protection. 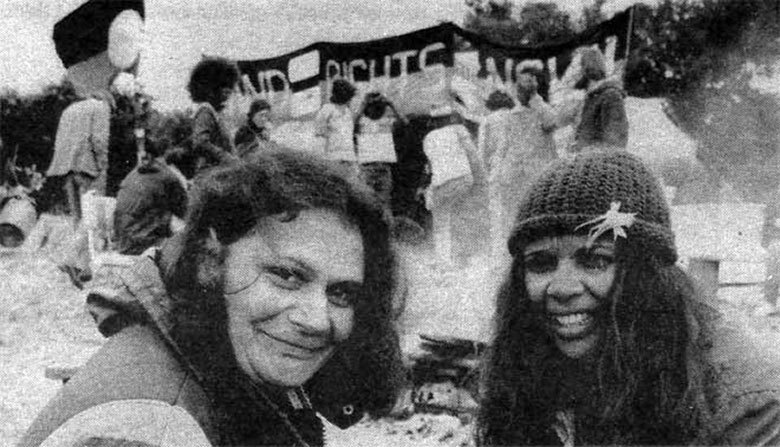 Sandra Onus with Christina Frankland in 1980 at the camp protesting the proposed aluminium smelter on Gunditjmara country. Image from The Gunditjmara Land Justice Story. 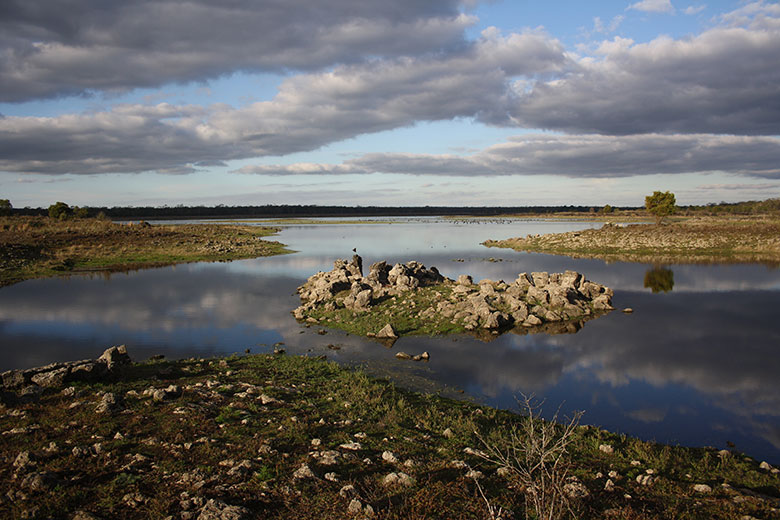 The Gunditjmara community first achieved native title in 2007, and in 2011 a second joint application (with Eastern Maar peoples) for native title in more areas was also successful. 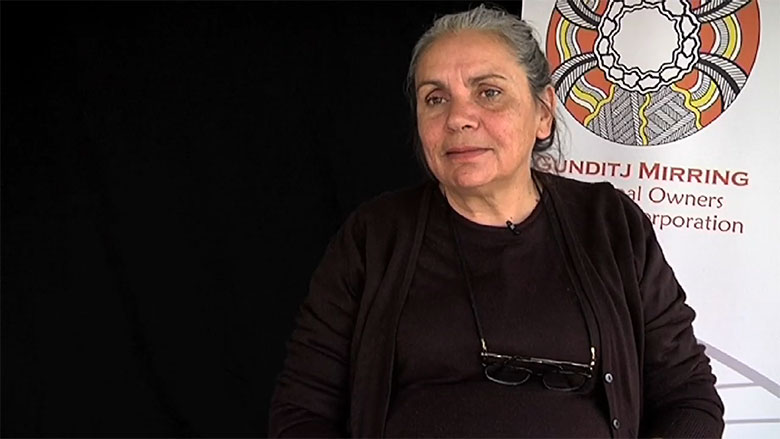 Chair of the board, Denise Lovett, was present at the ceremony where the Victorian government handed back the land. She recalls the elation:

...recognition of traditional ownership, connection to country, the importance of cultural heritage ... everyone was just so happy.

After the handback came the restorative moment in which Gunditjmara witnessed the water flowing back down out of the lake and into the channels of the ancestors.

Over the years, the corporation has achieved many milestones. Each one has boosted GMTOAC members’ spirits, and consolidated their status as rightful caretakers of this part of south-western Victoria:

Then came the greatest achievement yet: world heritage listing. Eileen Alberts, director of GMTOAC, was part of the delegation of Gunditjmara who travelled to Azerbaijan to hear the outcome in person. It had been mountain of work by a lot of people to reach the moment of the UNESCO decision. She described the welling up of joy as she heard delegates from other countries responding their application and describing it as ‘exemplary’:

It was such a long build-up. And with the slam of a gavel we’ve got world heritage. It was exhausting, but in the end it’s all worthwhile. It was the first community-led application. It wasn’t done by the state; it wasn’t done by the Commonwealth. It was done by a community of Gunditjmara people. 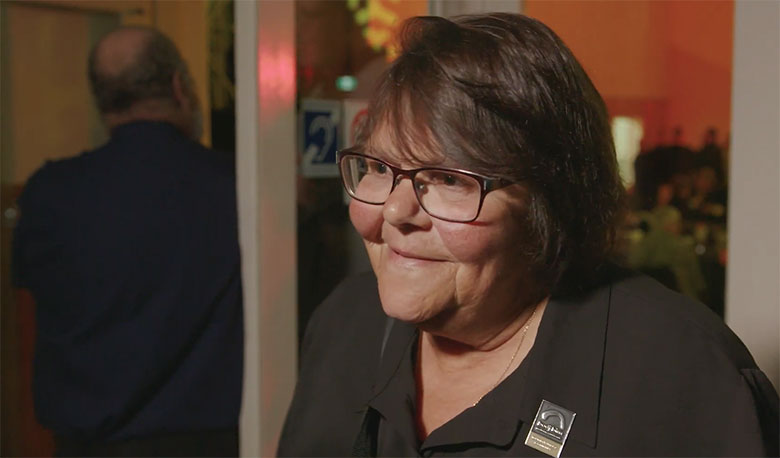 In 2020, GMTOAC seems to have hit its stride. The corporation is determined to maintain its pace of work and its commitment to successful partnerships and good governance, as GMTOAC’s knowledge and estate manager, Denis Rose, makes clear:

Longstanding partnerships have been really important to the world heritage process but also to the management of country, which is the most important thing. Our board is determined to keep improving our management, to make sure we protect those values, those important values that were inscribed.

In the last few months, the corporation’s long-term plan for a keeping place at the site of the old Lake Condah Mission has been realised, along with a memorial at the ‘Convincing Ground’ massacre site. Parks Victoria has just released the draft management plan for ‘Greater Gariwerd’—an initiative that also Eastern Maar Aboriginal Corporation and Barengi Gadjin Land Council Aboriginal Corporation. And most recently, there was the discovery of more fish traps and stone huts.