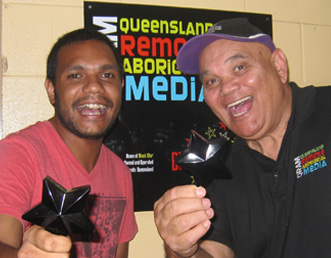 The corporation’s innovative approach to providing program and technical support to communities uses a wide area network (WAN) to connect the remote stations with the administrative and technical hubs in Cairns and the Tablelands. The network and its underpinning technology, known as Black Star, is quickly becoming a household name across the Cape and the Gulf.

‘This is new technology and thinking for Aboriginal radio broadcasting,’ says QRAM’s manager, Jim Remedio, one of the leading figures in Indigenous media. ‘It uses currently available infrastructure in communities—a combination of ADSL, BDSL and wireless connectivity plus ‘cloud’ storage—and it is ready to scale up again when the National Broadband Network is in place.’ 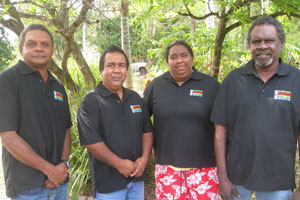 Program material can be sent from QRAM to stations, from stations back to the hub, or from station to station in the network.  As it delivers the Commonwealth Government’s ‘Closing the Gap’ projects, Black Star is more than proving its worth. For example, QRAM is currently producing and broadcasting a number of health awareness programs. The ‘Live Longer! Campaign as well as others tackling youth suicide prevention and combating binge drinking are specifically designed to reach people living in remote communities.

QRAM plans, scripts and produces the programs with community voices. The finished episodes are scheduled into QRAM’s central server and sent over the WAN. When they arrive at the remote community station’s computer they are already scheduled for automatic play at designated times during the day.

The journey from the central hub, via daily logs and the cloud, takes a matter of seconds. In the past, program material was sent on CD and delivery was not always certain or timely.  Relying on the pony express, a package could take up to four weeks to reach a destination.  Sometimes if there was not a broadcaster to receive the material it was left unplayed and there was little accountability back to the funding body.

Black Starguarantees that programs run in their designated times and for the allocated campaign period. The system can also send specific information to individual communities, allowing campaigns to be targeted and tailored to a whole new level.

‘Black Star was chosen to distinguish the network from the QRAM management structure and create a recognisable name to unite the radio services,’ explains Jim Remedio. ‘It is wholly owned and managed by the remote stations themselves so it gives back to the grassroots listeners.’

There is also no doubt that Black Star is providing a new lease of life to remote stations which can  now spend more time on their local content and less on administration. Although remote stations have been operating since 1992, they have mostly relied on programming relayed from metropolitan services. This means that they may receive Brisbane traffic reports, ‘what’s on’ announcements for city dwellers and similar items clearly not relevant to remote area listeners.

Black Star’s sound is one of positive general appeal and underpins the Closing the Gap messages. It has a massive music database (some 12,000 tracks) which caters for all tastes. Music is categorised and automatically selected into a 24-hour broadcast ‘clock’ seven days a week. This facility alone is a huge success for the stations. They no longer have to buy CDs or organise individual libraries but can instead provide far greater variety for their listeners. News and local weather feature regularly on the hour and, looking forward, the network has huge potential to play a key role in emergency and disaster management. ‘We have the ability to send messages to large audiences quickly,’ says Jim. ‘There are many possibilities.’

To find out more about QRAM, Black Star or to visit some of the remote stations via video go to www.qram.com.au