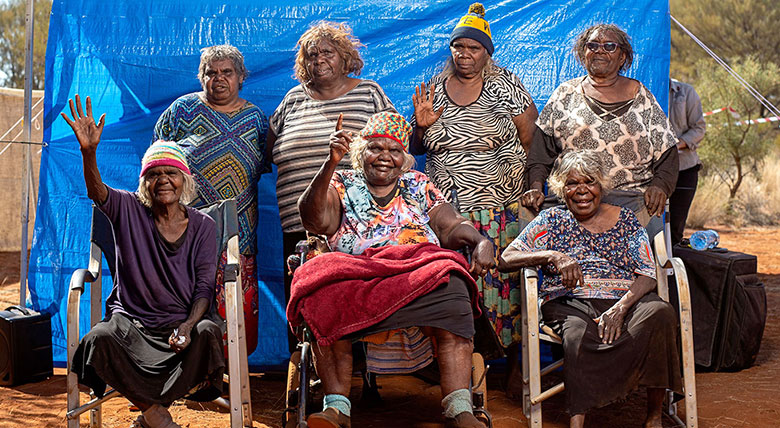 In 2020, NPY Women’s Council will celebrate 40 years since its first meeting—it formally incorporated in 1994. The corporation was established to coordinate, support and promote the cultural work, law, authority and interests of Ngaanyatjarra, Pitjantjatjara and Yankunytjatjara women. Through the decades, members and directors have put in a persistent, steady effort and maintained a strong commitment to their guiding principles, which appear in their rule book as well as on T-shirts they have produced: 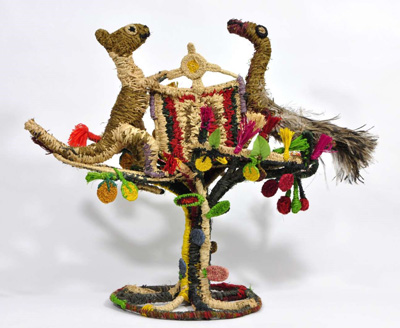 Niningka Lewis' work Australian Coat of Arms, we were there and we are here

Together the principles form an impressive strategy woven through the corporation’s every service and venture. They also hint at the long-range, interconnected, big-picture approach that members and directors of many Aboriginal and Torres Strait Islander corporations take. A good illustration of this point is NPY Women’s Council member Niningka Lewis’ work Australian Coat of Arms, we were there and we are here—a finalist in the 2018 National Aboriginal and Torres Strait Islander Arts Awards. As her artist statement says, the work translates feelings into fibre, twining a story of country, history and present-day politics.

...to face the challenges

By 2019 NPY Women’s Council looks set to exceed $20 million in revenue. Most comes from grants from dozens of different sources but the corporation also self-generates income, including through the Tjanpi desert weavers social enterprise. And it’s all put to good use: in 2017–18, the corporation spent all but 0.2% of its income. The most significant expense was staff—the corporation employs 248 people, 35% of whom are Aboriginal. Employees work on services and programs to support Anangu people at all the most challenging times of their lives:

In addition to direct employment NPY Women’s Council supports and engages hundreds of Anangu through life empowering opportunities; for example, there are around 400 tjanpi fibre artists supported through the social enterprise. 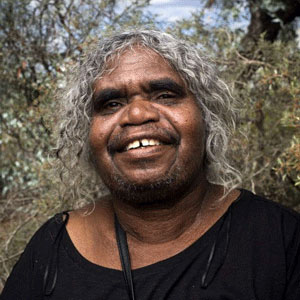 Lately, traditional Anangu healers have received hard-won respect and recognition as an important counterpart to mainstream health services in South Australia. (For details of another corporation of ngangkari, see this earlier spotlight story.)

In NPY Women’s Council, ngangkari run a program called Uti Kulintjaku, which means thinking clearly. An innovative approach to mental health and healing, the program works at the interface of knowledge systems and languages to build a better understanding of mental health and wellbeing. Resources developed as part of the program share this bi-cultural understanding more broadly.

Core to the project are workshops with ngangkari; senior Anangu; interpreters; and mental health care workers—to discuss mental health concepts and words and ways to develop a better understanding of the impact of trauma. Now, those concepts have been translated into pictures and words in two languages, in a set of cards—or a poster or fridge magnets—that people can use to talk about how they’re feeling.

Some of the cards for emotional literacy 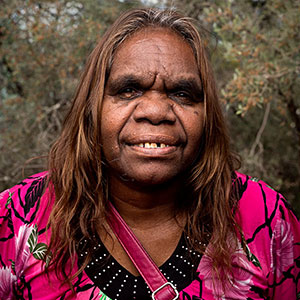 Rene Kulitja, one of 12 directors

In an essay in The Monthly, Kim Mahood describes asking four of the directors about the purpose of the project, and how after spending some time considering their response, Rene Kulitja, one of 12 directors of NPY Women’s Council, spoke on their behalf:

We want to do this project for our daughters and our sons, to look after them so they can be strong, to help them think for themselves.

We’re looking for a new way of using the old way in the new world.

The Uti Kulintjaku project operates on several levels as a critical bridge. It connects Pitjantjatjara, Ngaanyatjarra and Yankunytjatjara languages with English; it connects old with new cultures; and it connects people’s feelings of being traumatised and stuck with the possibility of working through those feelings.

It’s powerful; and for psychiatrist Marcus Tabart, clinical director of the Central Australian Mental Health Services and a member of the Uti Kulintjaku team, the project is ‘one of the most exciting and hopeful developments I’ve seen in Central Australia for the 21 years I’ve been here’ (quoted in the same article in The Monthly).

And if all that is not promising enough, the corporation has also just launched three guided meditations in Ngaanyatjarra and Pitjantjatjara as part of the Smiling Minds app (for iOS and Android).

These are some smart, strong, clear-thinking women—and we are truly inspired by their work.