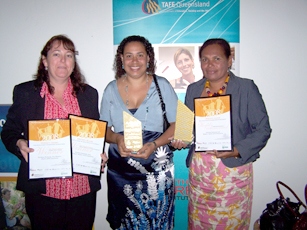 It’s always nice to be acknowledged for your hard work and dedication, especially when achieving results has required real commitment and teamwork. In the past 12 months NPA Family and Community Services Aboriginal and Torres Strait Islander Corporation (formerly NPA Women’s Shelter Aboriginal and Torres Strait Islander Corporation) has been celebrating the success of all their hard work, being named runners up at the 2009 Minister’s Awards for Excellence for Employers of Australian Apprentices in the Northern Queensland region and also winning a number of Queensland state ministers’ awards for excellence.

NPA—or Northern Peninsula Area—Family and Community Services is located in Bamaga, in far north Queensland on the tip of Cape York Peninsula, providing support and services for Indigenous families and victims of domestic violence in the communities of Bamaga, Injinoo, Umagico, Seisia and New Mapoon.

For the past two years NPA Family and Community Services—in partnership with Queensland Apprenticeship Services, Australian Child Care Career Options and Bamagau Kazil Torres Strait Islanders Corporation—has been working on a training project involving over 60 staff employed in their childcare services in the region. Their aim has been to train as many people as possible as confident and competent childcare workers in the NPA—not having to rely on qualified staff from urban areas. In November last year 34 trainees graduated with Certificate III Children’s Services qualifications, one of the highest completion ratios for vocational training in a remote area.

NPA Family and Community Services received no government funding for their training project. Instead, they channelled the government incentive for each employee back into training costs. The training project is ongoing. In August, 18 new childcare trainees started their Certificate III Children’s Services training. A large number of the trainees who completed their Certificate III training last November have continued on to study for their diploma, while the diploma trainees have completed their training and moved onto tackling the advanced diploma.

The corporation was nominated by Queensland Apprenticeship Services for the Minister’s Awards for Excellence for Employers of Australian Apprentices. Directors Mary Yoelu and Linda Wapau travelled from Bamaga to Canberra to receive their award at a dinner presentation held at Parliament House in the Great Hall on Tuesday, 18 August 2009.

CEO Amanda Ewart said: ‘We are so excited and proud to win such a prestigious award and receive national recognition for all our hard work to train people of NPA.’

And while all the awards are very much appreciated, the true reward for NPA Family and Community Services is seeing their people gain professional qualifications. That is the real measure of success. 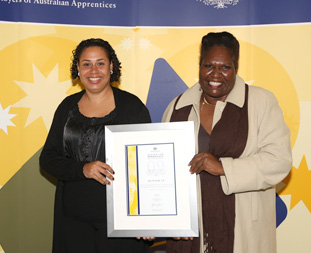