Armidale, New South Wales:  Since 1987 Minimbah Pre-school, Primary School Aboriginal Corporation has been a place for learning for Aboriginal and non-Aboriginal children. Tucked away on the green fertile plains of the Northern Tablelands, the school proudly offers a safe and culturally-sensitive environment for pupils from preschool to year 6.

There are 130 children enrolled at the school and 22 employees on the staff. Attendance is high in no small measure due to the school’s warm and friendly atmosphere.

‘You expect school life to be hectic with a hundred things going on—that’s normal!’ said Jenny Brown, the school’s executive principal. ‘But the past two or so years have been the most taxing I can remember.’

It’s probably fair to say Minimbah has experienced a difficult patch but it has come through stronger and better than ever—the result of a team effort by the board, staff, students, Minimbah families and the wider Armidale community.

In November 2014 the Registrar, Anthony Beven, placed the corporation under special administration to help it rectify some corporate governance and financial management issues.

At the time Mr Beven said, ‘Minimbah has a proven track record in achieving strong educational outcomes. To make sure this work can continue it is important that the corporation’s finances and administrative systems are put back in order as soon as possible.’

In just six months the special administrator, in close cooperation with the corporation, returned Minimbah to a sound financial footing. A new organisational structure was put in place and some new procedures introduced to help maintain tighter controls over record‑keeping. And by opening up the corporation’s membership to all Aboriginal people in the community, as opposed to just parents and guardians of children at the school, Minimbah has experienced a huge surge of goodwill. The change has meant that former students, parents and others who’d like to remain connected to the school now can—and there’s no doubt that their continuing contribution is much appreciated. Minimbah is known for its emphasis on family.

‘I’m delighted we’ve managed to work through our difficulties so quickly and thoroughly, thanks to the support from the community and the Registrar’s office,’ said Ursula Kim, the pre-school director. ‘We’re now confident and well placed to get on with what we do best—which is teaching and achieving some wonderful things for our school and students.’

And of course there are several wonderful things already going on. For instance, there’s the ‘bush tucker garden’ where children learn practical skills such as recognising nutritious foods growing around them and the value of caring for the natural environment. Learning about the benefits of different edible plants and developing healthy eating habits are high on the list. Nutrition education is important because it not only sets children on the right path for life but when children are properly fed they’re able to concentrate better, feel happier and more settled, and have the energy to perform to their best ability in the classroom and at games and sport.

Probably nothing demonstrates the school’s creative learning methods more clearly than its teaching of maths and literacy through music and dance. Minimbah also uses the ‘eight ways of Aboriginal learning’ program which is proving both effective and fun. ‘Using culturally-based dances and programs help the children with counting and spatial awareness but also with confidence and developing social skills,’ said Kirsty Balderston who teaches years 4, 5 and 6. ‘There are so many advantages, not least of which is reinforcing a sense of belonging and a further understanding of culture and heritage.’

The school has recently seen the completion of its multi-purpose hall so more dances, sporting events and other fantastic performances can be expected. After the launch on 1 April 2016 the Deputy Prime Minister and Member for New England, Barnaby Joyce, said, ‘It was a great privilege to officially open the new multi-purpose hall.  Students and the whole school community will benefit from using the new facilities.’

The hall which is named after the school’s founder, Mrs Dianne Roberts OAM, was built with $1.475 million of Australian Government funding by local building contractor, JNC group. JNC group also donated a further $97,000 plus to complete the new car park and the netball and other line markings inside the hall.

Everything is set for a bright future.

It’s certainly an exciting time for learning at Minimbah. 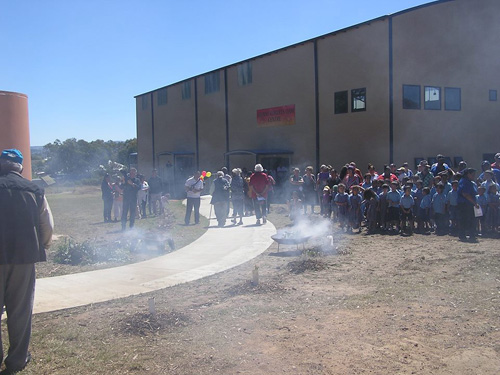 Smoking ceremony, conducted by Bruce Cohen, before the launch of the multi-purpose school hall. 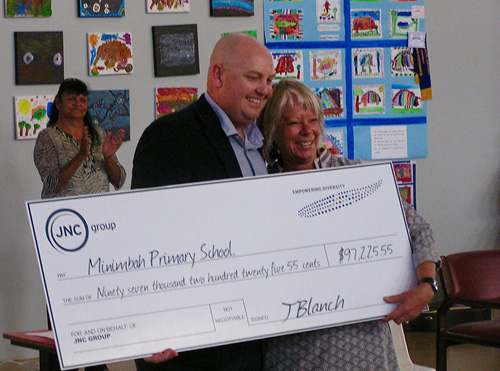 A big cheque—local contractor JNC group’s Jeremy Blanch presenting over  $97,000 to the school’s executive principal, Jenny Brown, to cover the final costs of the construction work on the hall and car park. ‘Minimbah is doing a great job here in Armidale,’ Mr Blanch said. 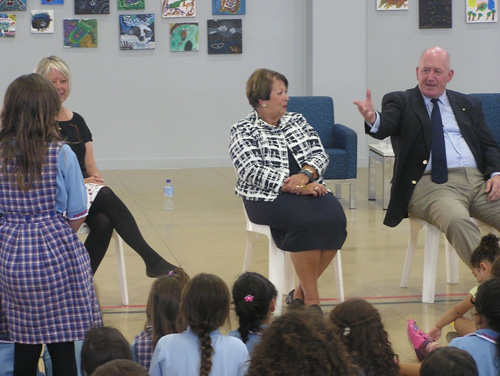 Answering questions. The Governor General Sir Peter Cosgrove and Lady Cosgrove visited the school in February 2016. Sir Peter also had a quick game of cricket with the Minimbah school children.