Over the last decade Marra Worra Worra, in partnership with community organisations in the area, has been at the forefront of the push for Aboriginal economic independence for the region. The result of this is that a large portion of the economy of Fitzroy Crossing is now controlled by Indigenous interests.

Based in Fitzroy Crossing, Marra Worra Worra is the oldest and largest Aboriginal resource agency in the Kimberley region of Western Australia.

The focus of this corporation has always been to help communities become strong and autonomous. Since the late 1970s they’ve been doing this by providing various support services to existing and emerging groups in the Fitzroy River Valley covering the area from Jimbalakadunj community,120 kilometres to the west, to Yiyili community, 170 kilometres to the east.

The corporation takes its name from a creek, Marra Worra Worra, where leaders of the original seven communities met. By the late 1970s these meetings had become institutionalised under this name, and when the leaders decided to employ a part-time bookkeeper to provide financial services, it became an organisation with an office and staff.

Until April 1981, when Marra Worra Worra was incorporated under the then ACA Act, it relied solely on bookkeeping fees and contributions from member communities supplemented by training subsidies and grants. Funding sources have changed during the years, but since 2004 the corporation receives most of its funding from government sources to provide a wide variety of programs to the twenty six communities it services.

Marra Worra Worra is controlled by a board of directors comprising elected representatives from each of the four main Indigenous language groups (Bunuba, Gooniyandi, Walmajarri and Wangkatjungka).

Marra Worra Worra is funded to deliver a number of government services to Aboriginal people and communities in the Fitzroy Valley region.

Marra Worra Worra also assist in a number of smaller programs such as the Home and Community Care (HACC) program and playgroups in communities as well as auspicing community funding for programs such as Shared Responsibility Agreements (SRA). 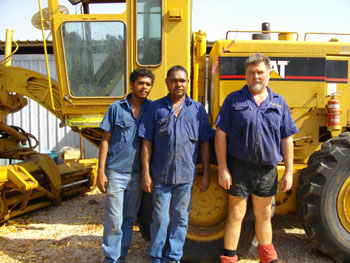 It is a fully functional workshop managed by our mechanic and trainer, Ian Pateman who has worked with Marra Worra Worra for the past three years. Over the years, Ian has worked with many local Indigenous staff with much success.

Currently, one of his staff, William Taylor, is in Perth doing his final apprenticeship study to become a qualified motor mechanic. He is due to complete his apprenticeship any day now.

Both of these men have worked for the past 12 months in the workshop alongside Ian learning all the basics of working with engines. They have been diligent workers turning up for work everyday.

All three men started with Marra Worra Worra on the CDEP program. Through this program, they have been able to access training and support to achieve their goals of becoming qualified mechanics. They have also been fortunate to have the knowledge and skills of their trainer, Ian Pateman, who along the way has mentored these men to achieve these positive results. It has enabled these men to look at the prospect of mainstream employment while being good role models in the Fitzroy community and encouraging other young local people to follow in their footsteps.