Cultural and artistic traditions have long enriched community life in the Torres Strait. On the island of Erub (Darnley) in the north east, Erub Erwer Meta Torres Strait Islander Corporation, trading as Erub Arts, is supporting those traditions while sustaining the unique identity of its people and their deep connection to the land, sea, and sky around them. 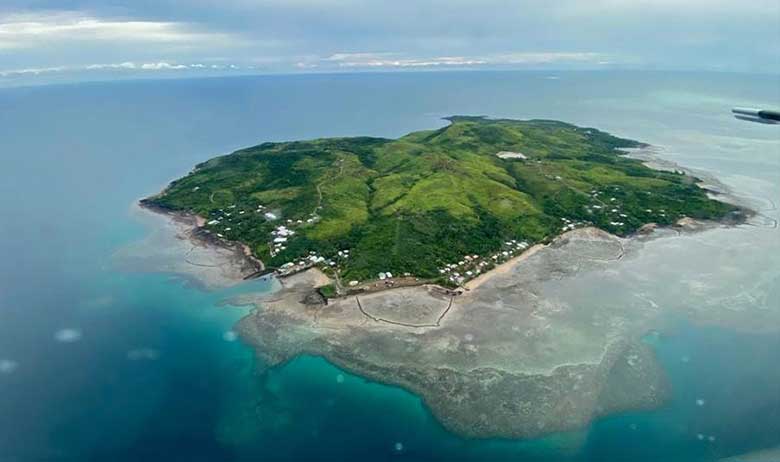 Erub is a volcanic island on the Great Barrier Reef in the north east of the Torres Strait, some 260km from Cape York. The island’s Erubam Le people are part of the wider Kemer Meriam Nation, along with neighbours from nearby Ugar (Stephens Island) and Mer (Murray Island). The people have a very close connection to the waters that surround them.

‘The land and sea that surrounds my island is special,’ says Erub artist Racy Oui-Pitt. ‘It is me and I am it. All my family is here. I can garden, fish and dive.’

The karem (waters) and ga nor (reefs) are stunning and support diverse ecosystems. Notably, six of the world’s seven marine turtle species can be found in the area.

Traders from neighbouring Pacific islands, Malaya, and the Philippines have long been drawn to Erub for its pearls, beche-de-mer, and seafood. A striking feature of the island are the basalt rocks which have been placed in large arcs around the coastline and act as fish traps as the tide goes out each day.

In the early 1990s, schoolteacher Diann Lui founded the craft group Ekkilau, working from a converted classroom. The group were soon participating in workshops in various mediums for both indigenous and non-indigenous residents by the Thursday Island TAFE art coordinator, Lynnette Griffiths.

The first arts project to emerge was a community wide collaboration that explored the traditional story of the nearby Maizab Kaur (Bramble Cay).

Lynnette Griffiths, artistic director on this initial project, says it was a process of ‘finding a way forward with workshops, as sensitive material had to be dealt with by community. Putting visuals into an oral history and relating that in a practical and sensitive manner produced three main figures created in clay, wood, plaster and natural fibre.’ The work was acquired by the National Gallery of Victoria in 2001.

Building on this early success, Diann and Lynnette sought funding from state and federal bodies to build an art centre which opened in 2005. In 2008 Erub Arts centre became the first incorporated art centre in the Torres Strait.

‘A committed team of directors supported by consistent management has provided a stable base allowing confidence to grow and expand,’ says founding manager Diann Lui. ‘As a ream we have successfully crossed the cultural divide, marrying western systems with cultural protocols.’ 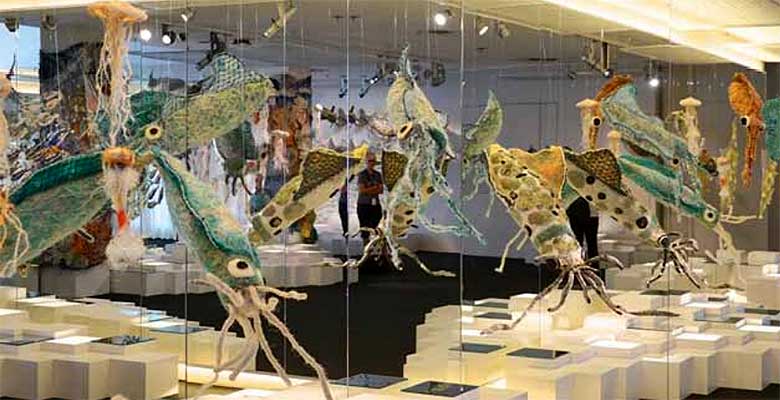 Ghost nets are discarded fishing nets and they have become a significant global issue. This has become an escalating problem for people and the wildlife across the Gulf of Carpentaria over the last few decades. Drifting down from the heavily fished waters of the Arafura Sea, the nets entrap all manner of sea life who have no way of escaping and eventually die. An alliance of concerned indigenous communities established GhostNets Australia in 2004 as a way of addressing the problem. Since then, Indigenous coastal rangers have been at the forefront of removing tens of thousands of dangerous ghost nets from waters across northern Australia.

Turtles are particularly at risk and this has been a major concern for the Erubian community.

‘Turtles are special to us and an important as a food source,’ says Jimmy John Thaiday. ‘But we must also look after turtles and the land where they lay eggs to ensure their ongoing survival.’

‘The ghost net as a new medium presented a great opportunity to create the sea life that is special, while spreading an environmental message,’ says Lynnette Griffiths.

The use of ghost net and the powerful story it helps to tell has helped to raise the profile of Erub Arts and the issues it is addressing well beyond the communities of the Torres Strait.

The centre is internationally recognised for its large collaborative installations that feature the very same marine life that is at risk from the nets.

Turtle, a ghost net sculpture by Ellarose Savage now held by the Australia Museum in Sydney was even featured on a commemorative stamp issued by Australia Post in 2012. 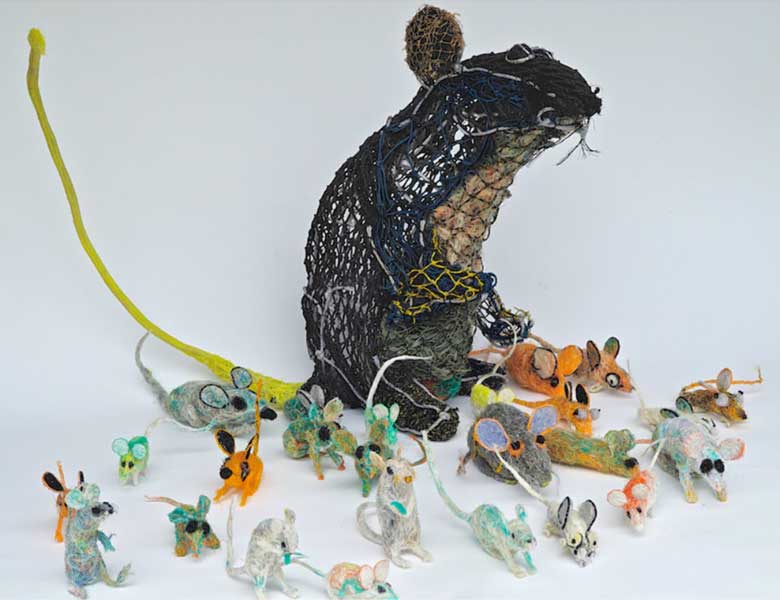 Extinction of the Bramble Cay melomys

The Erubam Le have strong ancestral ties with Maizab Kaur which lies 50km north of Erub. The cay is uninhabited by humans but a haven for green turtles and large seabirds. The cay received national attention in 2019 when the Australian Government announced the extinction of the Bramble Cay Melomys, a small rodent only found there. The population had been in decline for some time before this, and the last actual sighting was by a fisherman who visited in 2009.

The widely accepted cause for the demise of the melomys was sea level rise. The rodent is frequently referred to as the first mammal to go extinct due to human induced climate change.

Since 2004, 90% of the vegetation on the island has disappeared as high tides began to regularly wash over the island. The reduction in available food was disastrous for the melomys.

The artists of Erub decided that a response to the news was important. ‘I made the large Mukeis as the matriarchal protector of the colony,’ says Jimmy John Thaiday.

The work was a finalist in the National Aboriginal and Torres Strait Art Awards (NATSIAAs) this year. Until February 2022 you can see the work in the online gallery.

Diann Lui says ‘the response from the media was good, and I feel that this was due to the timing of both the NATSIAAs and the Darwin Aboriginal Art Fair. Individual melomys at the fair sold, but no institution has seen it as important as there have been no sales enquiries so far.’

Erub Arts along with the Ghost Net Collective continues to work towards national and international ghost net commissions. Together they shape and form the ghost net into immersive, colourful exhibitions, taking responsibility in a collaborative manner. Their job is to transform a deadly nuisance into a creative medium telling challenging stories.