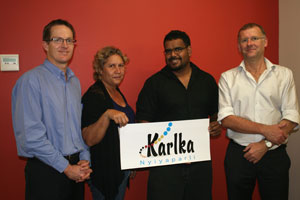 Karlka Nyiyaparli Aboriginal Corporation is growing quickly in size and in ambition. Its members are the Nyiyaparli people whose country is traditionally located south of Marble Bar in Western Australia’s Pilbara.

The corporation represents its people in matters associated with their native title claim, which includes all negotiations and business dealings.

One of these is the recent Rio Tinto Iron Ore agreement which the Nyiyaparli people entered into in March this year. It is expected to produce, among other things, training and employment opportunities. Over many years the corporation has shepherded mining companies, such as Rio, across its land. It has shared important knowledge and advised about such matters as sacred sites and cultural heritage.

And while it has shared this knowledge generously it has been mindful at all times of looking after the land. Protecting country is the corporation’s primary objective.

Typically, Karlka Nyiyaparli cultural heritage workers go out on surveys with mining groups every few weeks. ‘It’s dusty hard work,’ says Michael Stream, ‘We cover a large area of our people’s land and we spend time on our country. It can get very hot—but it is also tremendous work because I love the land and I am showing it to visitors.’

Trips may take a few days or a few weeks.

Meanwhile, back at the corporation’s new premises in Port Hedland, there’s plenty to do in the way of negotiating and organising business deals. ‘It’s great we have so much going on,’ says corporation executive officer and director Bradley Hall. ‘There’s a great energy about the place, a lot of work, and the corporation members are reaping the benefits.’

It’s hard to believe how far the corporation has come.

In September 2010, ORIC’s examination of the corporation’s books discovered some serious irregularities in corporate governance and financial management. It also became clear that the CEOwas not acting in the best interests of the corporation or its members.

As a result, the Registrar decided to place Karlka Nyiyaparli Aboriginal Corporation under special administration, from 1 March 2011 to 31 August 2011.

‘This opened our eyes to what had been happening to us,’ says Bradley Hall. ‘We knew things weren’t right but it’s very hard when you don’t know what to do about such matters.’

‘Karlka has been one of our most successful special administrations,’ says the Registrar. ‘We were able to identify some serious discrepancies and put them right. The former management of the corporation has been replaced and over $2 million of the corporation’s money has been recovered from irresponsible overseas investments and from various other parties.’

Bradley Hall, one of the new directors, is very pleased with the outcome. ‘Having the special administrator here was like having a sensible friend around. The whole special administration process has helped us to sort out our business and governance arrangements, and to get rid of someone who was not working in our corporation’s interests. We now have a clear way forward.’

Today the corporation is in good operational order with a strong financial position and a sound corporate governance structure in place.

The sky’s the limit.