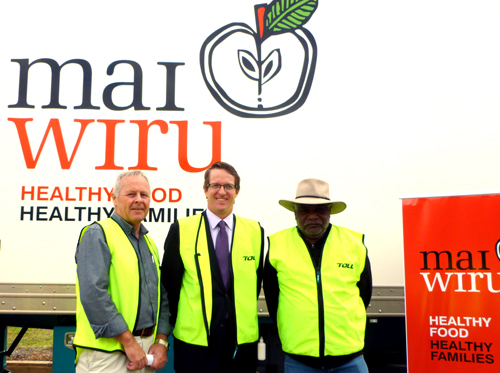 Mr David Schomburgk (left) and Mr Robert Stevens (right) with the Registrar. Mr Anthony Beven at the official launch on 28 April 2015 of the new freight service said, ‘This was a great event and pleasing to see so many APY Lands stalwarts attending. Congratulations to Mai Wiru.’

The APY Lands cover 103,000 square kilometres along the north-western corner of South Australia. About 3,000 Anangu people live here in 10 separate communities and are served by a network of Aboriginal-owned and controlled community stores.

In 2010 Mai Wiru Regional Stores Council Aboriginal Corporation was established and incorporated under the Corporations (Aboriginal and Torres Strait Islander) Act 2006 (CATSI Act). With the assistance of the Registrar’s free legal scheme, LawHelp, an agreement was entered into whereby Mai Wiru took over the coordination and management of five of the community stores.

It was a bold and sensible move to bring the stores under one umbrella as it has meant Mai Wiru has been able to ensure that the Anangu people have had access to affordable food and other essential everyday items. It has also meant that the boom─bust cycle that often afflicts small remote stores has been broken and the individual stores now trade profitably. Not only this but Mai Wiru uses the profits from the stores to fund important community projects, such as sport, school and lore, and culture activities.

‘Each store is different in size and layout but they are all set up to provide everything,’ said Mr David Schomburgk, the general manager of Mai Wiru. ‘The necessities of everyday life are available throughout the year while more unusual items—or larger goods such as furniture—are ordered in and may take some time to arrive.’

Although a couple of the stores may be better than the others at meeting the needs of their communities, it’s fair to say all have struggled to provide a reliable supply of affordable fresh food. Stocking shelves with reasonably priced fresh fruit and vegetables has been an ongoing challenge.

‘For far too long food security has been a troublesome issue for us,’ admitted Mr Schomburgk. ‘But I’m pleased to say, thanks to the efforts and goodwill of many, we now have a simple and entirely workable solution.’

On 28 April 2015 community members and guests gathered at Toll Refrigerated in Wingfield, Adelaide, for the official launch of a new secure freight service that delivers fresh food to the APY Lands, cheaper, faster and more regularly.

For the first time fresh food, bought at Adelaide’s Fresh Produce Markets at Pooraka, is being transported within 48 hours to Mai Wiru’s community stores. On the return trip the trucks take back recyclables and waste for processing.

‘It’s an excellent initiative that’s been in operation since September 2014 and means that everyone living on the APY Lands can now buy cheaper and fresher produce, on par with the fresh food markets in regional centres,’ said Mr Schomburgk.

The South Australian Minister for Aboriginal Affairs and Reconciliation, Mr Kyam Maher, who spoke at the official launch, noted that the new system had cut costs of healthy foods by as much as 25 per cent.

Minister Maher also said that while the new scheme initially received $400,000 of state and federal money it’s now self-funded through sales and no longer needs to rely on government funding. It’s a real community-driven success story.

‘The Anangu people can feel proud about Mai Wiru being an Anangu-owned and controlled corporation that is providing this excellent service to APY communities,’ said Mr Stevens.

Plans are also afoot for Mai Wiru to expand training and job opportunities for the local people through its warehousing, retailing and freight service.

There is good reason for the people of the APY Lands to feel encouraged. 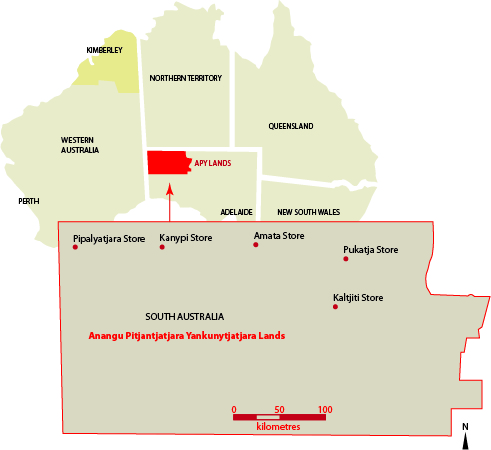 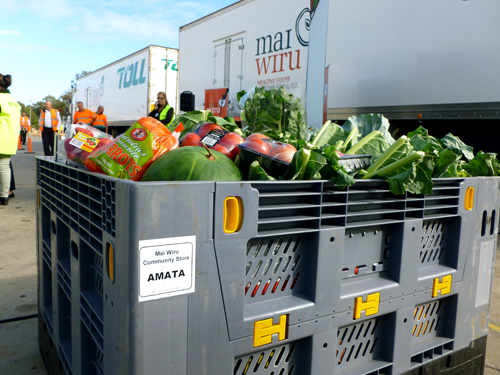 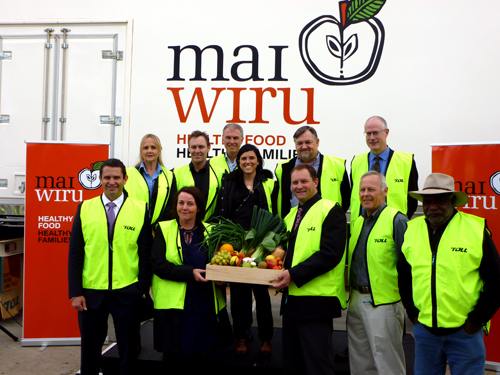 At the official launch, 28 April 2015: Minister Maher (far left), Mr David Schomburgk and Mr Robert Stevens (both far right) with supporters of Mai Wiru. In the early stages of the project a number of corporate companies provided invaluable advice including Foodbank SA, a not-for-profit social enterprise which sources and distributes healthy food in bulk through extensive, efficient warehousing and freight systems.