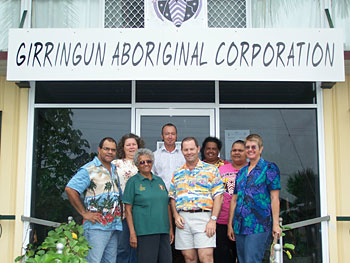 Girringun Aboriginal Corporation is located at Cardwell, half-way between Townsville and Cairns in north-Queensland. The corporation represents the interests of traditional owners from nine tribal groups: Bandjin, Djiru, Girramay, Gugu Badhun, Gulnay, Jirrbal, Nywaigi, Warrgamay and Warungnu. Girringun is the name of the ancestral creator of the Warangnu, Jirrbal, Warrgamay and Girramay people. This ancestral creator is responsible for the marriage and hunting lore.

The corporation has over 650 members, with the governing body comprising two representatives elected from each of the nine tribal groups. Girringun’s vision is to provide sustainable outcomes for its members and the community at large while maintaining and caring for the land and preserving their culture and traditions.

Girringun Aboriginal Corporation has been active in the north-Queensland community since its incorporation in 1996, contributing significantly to the advancement of Indigenous affairs. Girringun was instrumental in negotiating better land and sea management outcomes, in the process, laying the foundations for other traditional owner groups looking to do the same. The successful development of Australia’s first Traditional Use of Marine Resources Agreement is one such example of Girringun in action.

Girringun Aboriginal Corporation was influential in the Queensland Government decision to rename Lumholz National Park. After almost a decade of negotiating with the government, the park was renamed Girringun National Park in 2003 in recognition of the connection that the nine tribes of Girringun have with the land.

The corporation is helping to preserve the cultural heritage of the traditional owners by nourishing the talents of their artists and artisans. The many talented artists of Girringun, including weavers, jewellery makers, painters and sculpters, exhibit their artworks at Girringun Arts centre. These artists are passing traditional skills to the next generation of artists and also generating an income stream for the corporation.

Girringun was recently successful in its bid for funding under the Australian Government’s Caring for our Country program and the Queensland State Government’s Wild River Rangers program. Girringun now employs 11 community rangers and a ranger coordinator to manage their traditional lands. Girringun has begun the process of applying for federal funding to start negotiations for the declaration of a Girringun Indigenous protected area.

For a closer look at the Girringun Aboriginal Corporation, go to their website at www.girringun.com.au.