Forbes, New South Wales: Aboriginal and Torres Strait Islander corporations with a large-scale, well-funded operation tend to have the highest profile. But many survive year after year on the strength of the commitment and sustained effort of their members and directors. Forbes Wiradjuri Dreaming Centre Indigenous Corporation is a great example. Its open-hearted determination is nourishing the whole community in and around Forbes.

Directors of the corporation collectively represent all the local Wiradjuri families. In part their purpose is to look after Wiradjuri people and culture—by maintaining traditions, caring for country, and building capacity among Aboriginal job seekers. But other objectives involve reaching out to non-Aboriginal people—sharing Wiradjuri knowledge and experience, and promoting reconciliation and mutual respect. Forbes Dreaming Centre welcomes everyone, whatever their cultural background.

Jessica Buckman is a young member of the corporation who is often called on to welcome visitors to Wiradjuri country.

Director Aileen Allan is a strong driving force for the corporation. It was her idea to incorporate, in 2014, after a small parcel of land adjacent to the lagoon in Forbes became available. It had been managed for several years by a landcare group who had removed willows and other weeds. The group was moving on, so the land was heading back to council control. Miss Allan stepped in and made the case for an Aboriginal-controlled space.

When Aileen was growing up, to express Aboriginality was forbidden, as was being in public with more than one other person. Now that she has access to a small piece of Wiradjuri country—to look after, to host culture, to enjoy and to share with anyone who comes—she's in 'heaven'. 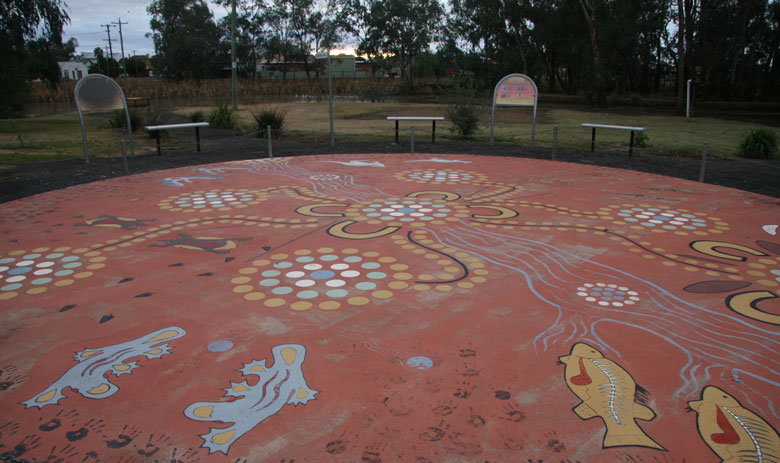 The circle is a focal point in the dreaming centre. Local children signed the painting with a handprint. 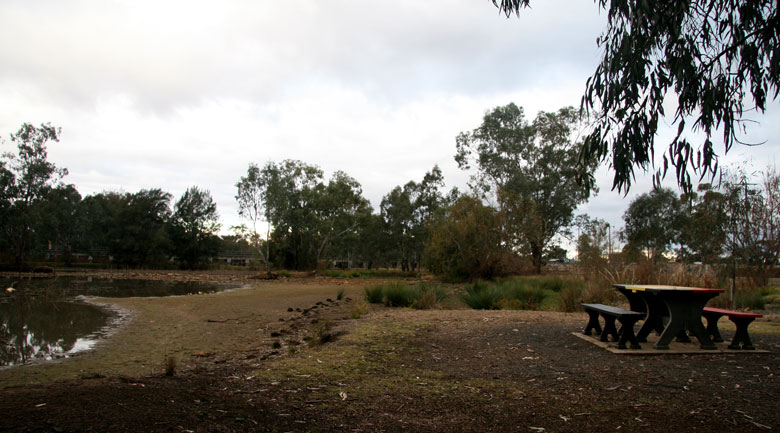 A shady picnic table painted with the Aboriginal flag provides a peaceful place to sit and enjoy the garden. 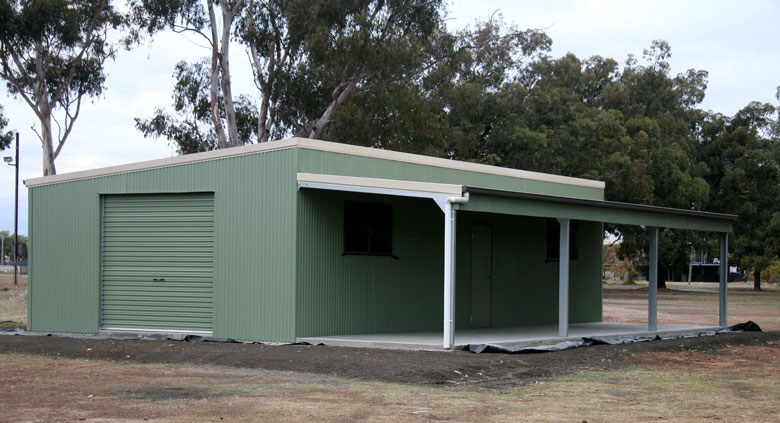 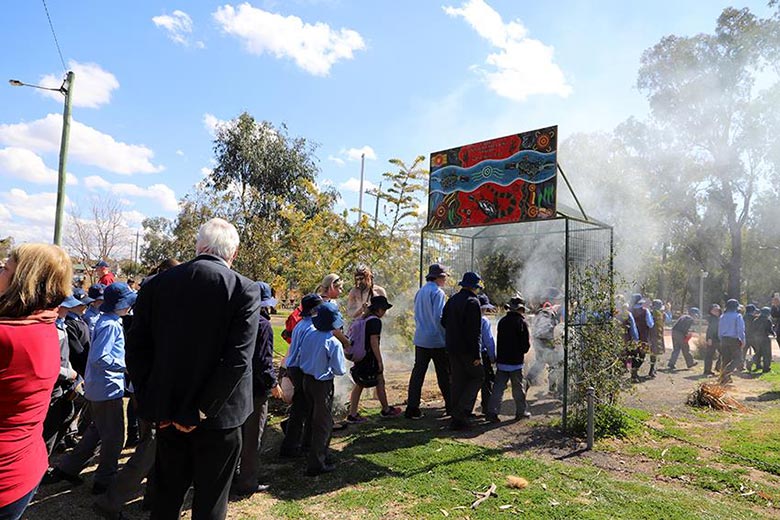 Above: Entering Forbes Wiradjuri Dreaming Centre for NAIDOC celebrations on 3 September. Below: the opening ceremony at the same event. Both pictures courtesy of Forbes Shire Council. 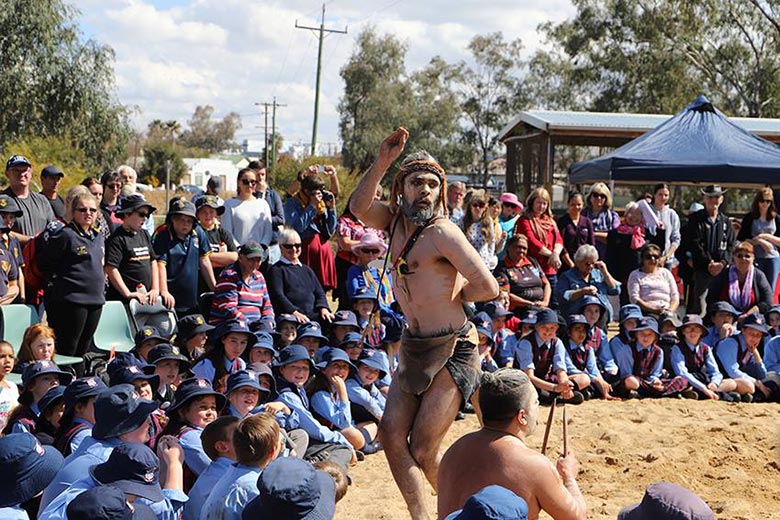 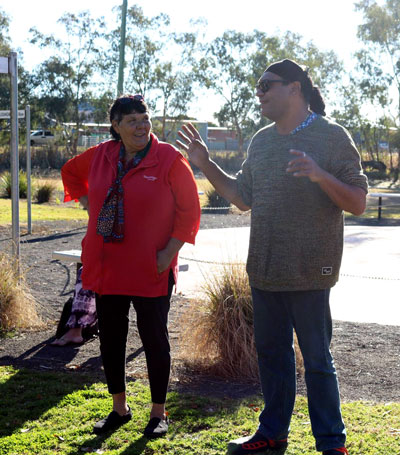 Mark Olive visited the dreaming centre in June and then again in August.

Forbes is very cold in July, so this corporation celebrates NAIDOC in September instead. This year the corporation welcomes people to the garden on Monday 3 September with a program of activities that includes bush tucker, traditional dancing, basket weaving, a performance from the Forbes North Wiradjuri Choir, and a small art exhibition in the new hub building.

September is a big month for Forbes Wiradjuri Dreaming Centre Indigenous Corporation, because it also plays a special role in association with the one-day food festival, Grazing Down the Lachlan. Aileen has befriended the festival’s creative director, Mark Olive—also known as the Black Olive—so they have concocted a plan for an after-party the day after the food festival.

Where the energy comes from

For Aileen, working on the Forbes dreaming centre has been hard work but it’s given her great joy, new skills and a boost in confidence:

It’s a good place. I do it for the youth. I love it. Before I started this… I never asked anyone for anything. If I was starving, I’d not ask for bread. I’m not afraid to ask now, if I need a bit of blue metal, or some plants.

And what keeps her going is her determination to keep this small part of Wiradjuri country alive with activity and in Aboriginal hands. She sees a wealth of possibilities:

As good as when I had my children—that’s how I feel about this place. I’d be devastated if it went back into council hands; I love it so much. We do some beautiful stuff down here. We need somewhere people feel comfortable: women, unmarried mums, single men with babies—to learn about caring for babies. I can’t sleep at night with all the things I want to do for this place.

The corporation has big dreams, of sculptures around the lake, an open-air cinema, and a hum of activity, culture and respect. When asked for her vision for the corporation, Ms Buckman says ‘I’d like to see young people more involved; bring people closer together; get rid of the line between Aboriginal and non-Aboriginal people.’ At that point another director of the corporation, Robert Buckman, adds with a wink, ‘We’re closing the gap.’

For the shorter term, the corporation has some very clear and very practical goals, to grow more plantlife for bush tucker, medicine and weaving; and—importantly—to persuade the council to let them install some toilets.