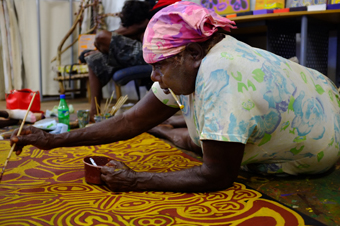 Northern Territory: The Lajamanu community’s strong sense of ownership and involvement in the Warnayaka Art and Cultural Aboriginal Corporation add up to jobs and a prolific output. Members are helping to build avenues for selling their artwork while at the same time protecting their future, not only for themselves but also for their children and grandchildren.

The corporation has 65 listed members and, on any one day, around 30 people are at Warnayaka’s art centre, painting, carrying out jobs or perhaps there just to have a talk over a cup of tea. Some may go to enjoy some song and dance or to join the monthly trip to the spinifex desert to collect bush tucker. Members produce as many as 1000 paintings a year and are represented at all levels of decision-making.

What’s striking is both older and younger members work together painting, making wooden artefacts or works on paper. Their paintings—acrylic on canvas and linen—are both traditional and contemporary. Many are created through a traditional ceremonial process using a broader palette of contemporary colours.

Manager and mentor Louisa Erglis says the art centre got off to a slow start because of structural issues. ‘It was set up by the local council and suffered a setback in the first year with a shire amalgamation which involved a change of manager. Now it’s got its own momentum and it just grows.’

Momentum indeed. In its first year the art centre grossed $40 000 and by May this year it had already grossed more than $151 000 for the 2011–12 financial year. While most of the sales are to visitors to the community Warnayaka’s art centre also has buyers in Sydney, Melbourne, Perth and Brisbane.

Louisa says that art associations and art fairs, like Desart’s Desert Mob in Alice Springs and Darwin’s Indigenous Art Fair, have helped substantially in marketing the artists’ work. ‘There’s a biannual festival, "Milparr", that attracts people who have heard of the community—not tourists—and we piggy back on that. It does really well and we can get up to $50 000 worth of sales.’

Louisa also acknowledges the ‘powerful impact’ of having Lajamanu artists represented in important private and public collections, such as Holmes à Court, the National Gallery of Victoria and Artbank.

‘One of the big changes we’re making is improving our internet profile. We hope to be fully functional with an online shop in a couple of months.’

While Louisa is the only one who works full time, mining royalties allow for the employment of some casual staff and funding from NT Jobs provides for the equivalent of three full-time positions. The mix of part-time and casual positions allows for more people to be involved—in other words, more bites of the cherry.

‘Some of the business models are “you do the art, we’ll run the business” but here everyone contributes.’

Members learn how to document the artwork, run a database, and take photographs. ‘We want to learn our new art software ‘SAM’ so we can sell online,’ says Sharon Nampijinpa Anderson. ‘And we also want to learn how to pack the paintings!’

But it’s not just about running a business it’s also about trying to make a future for the artists and their children and grandchildren. ‘For example, making sure all Lily Nungarrayi Hargraves’s paintings are catalogued,’ says Louisa, ‘and helping her to organise a will so that her family benefits from her work.’

At the heart of art

This report examines the Aboriginal and Torres Strait Islander visual arts sector over the past four financial years. Read reportxxx 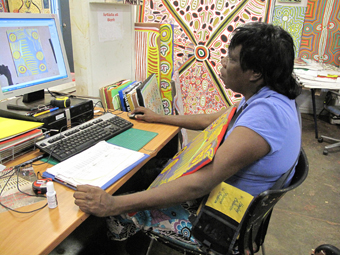