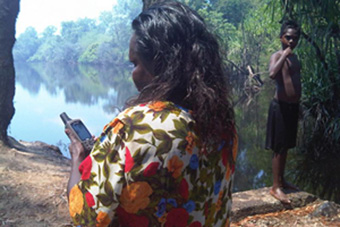 Palmerston, Northern Territory: It may be small in size but big things are happening at Karrabing Indigenous Corporation. Its short film Karrabing! Low Tide Turning created and scripted almost exclusively by corporation members was not only selected but has since played at the prestigious Berlinale 62nd International Film Festival. At each of its four screenings in February it was well received. ‘It was greeted by large warm crowds and new screening invitations,’ says Beth Povinelli, the corporation’s contact person and one of the principal writers.

Incorporated under the Corporations (Aboriginal and Torres Strait Islander) Act 2006 in 2009 one of Karrabing’s main objectives, as stated in its rule book, is to ‘educate younger Indigenous members in traditional knowledge systems’ and to learn ‘contemporary trades and knowledge'.

In an entirely authentic and recognisable way Karrabing’s film captures the ups and downs—or ebbs and flow—of everyday life for Aboriginal people moving between the city and remote country. ‘Karrabing’ loosely translated in language means ‘the tide’s final ebb before it draws out to return again’—the relentless return is significant. It represents hope and resilience.

And so does the film. At its bare core it shows the experience of Aboriginal people managing in a western world yet not forgetting who they are and where they come from.

As a story it is quite straightforward. An extended family group tries to track down a missing family member so as not to lose their government housing. Their quest takes them from the suburban ghetto to remote Anson Bay where they try to set up an outstation.

The difficult part of living in a western world has more to do with poverty, racism, disempowerment and neglect.

Karrabing Indigenous Corporation works hard to counterbalance Aboriginal stereotypes. It offers a big vision and a chance for people to be strong and capable—in short, to have an outlook that is ‘technologically engaged, economically sustainable, culturally congruent and environmentally connected’.

Although Karrabing won its land it has no infrastructure—no roads or bridges—and next to no capital. In view of this, explains Associate Professor Tess Lea, former ministerial adviser in the Northern Territory Government, ‘The corporation started to think about ways to generate livelihoods that would harness traditions and technology, joining older and younger generations and tapping into their talents.’

Karrabing! Low Tide Turning is a fine result that demonstrates the corporation’s clear vision, entrepreneurship and courage. Perhaps the next step is a full length movie. 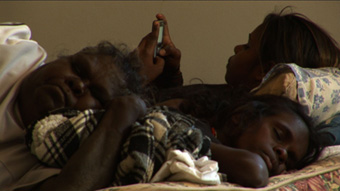 Note:
For Karrabing the collaborative process of making the film has been as important to corporation members as the film itself and the invitation to take part in the Berlinale 62nd International Film Festival—for more information please go to www.karrabing.org.