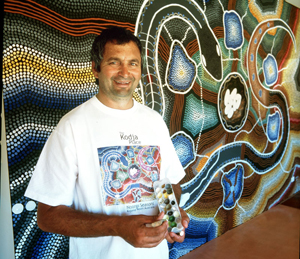 Kojonup, Western Australia: Everyone who walks into The Kodja Place is immediately impressed. Its appeal may be different for different people but all agree it’s a wonderful resource that perfectly expresses the people who have created it.

‘We’re a visitor centre, an interactive museum and a repository for people’s stories,’ says Glenys Russell, the manager of The Kodja Place which is supported by Kojonup Aboriginal Corporation. ‘We also have an art gallery, a gift shop and outside there’s a beautiful rose maze for visitors to explore which tells the stories of three women from contrasting cultures—Noongar, English and Italian.’ 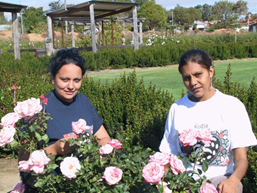 The Kodja Place lies in the small town of Kojonup, about 250 kilometres southeast of Perth along the Albany Highway. It’s a spacious, architecturally-designed, rammed-earth building packed with symbolism. Take, for example, its shape which is inspired by the kodj, a stone axe used by the Noongar for finding and preparing nourishment for the community. Today The Kodja Place is a dynamic working space which provides nourishment for the mind.

The blade end of the axe—the heavy part with the cutting edge—is the area within the building where cultural work and artistic achievements are displayed. Every so often the exhibits are changed to keep the cutting edge sharp. ‘We see it as flaking off the worn edge to expose the new clean edge—which represents new ideas and energy continually flowing through,’ explains Robert Sexton, who served as the chairperson of The Kodja Place Advisory Committee. 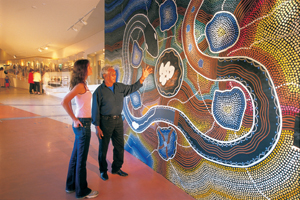 From the beginning the concept was to build something of lasting importance—something that could adapt and evolve long into the future. The theme chosen was ‘one story many voices’, exploring the histories of past and present residents of the region and two distinct cultures—Aboriginal and European. It was a turning point in the project’s development when the Noongar Elders requested for their story to be told alongside the history of the Europeans. With both stories woven through the many innovative displays, The Kodja Place achieves an effortless yet unique and sincere statement of reconciliation.

Since its official opening in 2002 it hasn’t looked back. These days, Noongar people live their lives in the modern community, confident in the knowledge that their position as the original inhabitants of the area is acknowledged and their heritage is preserved. 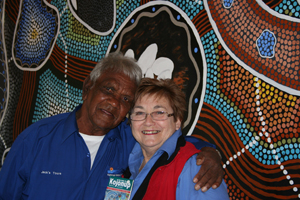 Kojonup Aboriginal Corporation, along with the Shire of Kojonup and the Kojonup Tourist Association, has, in large measure, contributed to the success of The Kodja Place and vice versa. Through its retail operations local Noongar people have found employment and the chance to develop business opportunities and interests—for example, conducting cultural tours and they have also found an outlet for their art.

Education features strongly too with groups of schoolchildren among the most frequent visitors. They come to hear the life stories of respected Elders such as Jack Cox, a much-loved guide and corporation member who takes a very hands-on approach. 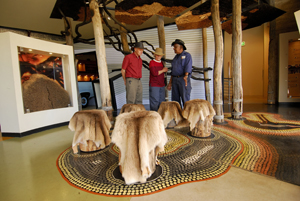 ‘I enjoy meeting the visitors, especially the schoolchildren. Through The Kodja Place we have created a happy and productive community,’ says Mr Cox. ‘It’s good to be part of it and to be sharing my story and my culture. It’s a way to keep culture alive and friendships strong.’

So next time you are travelling south from Perth, plan on stopping at The Kodja Place and Kojonup Aboriginal Corporation. Entry is free. The address is 143 Albany Highway, Kojonup, Western Australia. 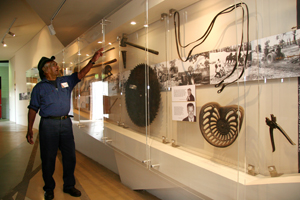 Photos: All photos courtesy of Kojonup Aboriginal Corporation and The Kodja Place Collection
Top: Craig McVee, a director of Kojonup Aboriginal Corporation, putting the finishing touches on the mural, entitled Creation—Six Seasons, which hangs in the foyer.
Middle: Initial trainees at The Kodja Place, Jaimie McVee and Melissa Riley, among the roses. The idea behind the rose maze was to create a place of restful beauty, unique and lasting. The 2,000 roses that make up the garden are all Australian bred.
Middle2: Jack Cox explains the mural to a visitor.
Middle 3: Partnership between Noongar and Wadjela (European). Elder and guide Jack Cox with manager Glenys Russell.
Middle 4: At the story telling circle. Jack Cox is known far and wide for his lovely sense of humour and wonderful yarns as he takes visitors through the museum and points out special features in many of the stories revealed at The Kodja Place. It is also possible to trace Mr Cox’s grandfather’s long and dignified struggle to be recognised as a citizen.
Bottom: Describing old farming equipment. A former state champion boxer Jack Cox as a young man helped farmers to clear the land and also worked for many years on local sheep farms.