Wilinggin Aboriginal Corporation has been awarded the 100 millionth carbon credit.

Wilinggin’s largest project involves training and employing traditional owners as fire specialists and rangers who conduct regular burns in return for carbon credits. In September 2021 it was part of a significant milestone when the federal government awarded the corporation the 100 millionth carbon credit under the Emission Reductions Fund. The Fund encourages reductions in the amount of greenhouse gases released into the atmosphere by issuing carbon credits that can then be sold on the carbon market. Savanna fire management is recognised as an approved activity under the scheme. Speaking as the Australian carbon credit units (ACCUs) were being awarded, Wilinggin chair, Mr Arnold Sahanna, said:

The Wilinggin savanna fire program has been core to Ngarinyin people being able to speak up for country, to build a strong corporation and to look after country and culture. To do this while helping the climate and reducing carbon emissions is even better. It’s wonderful to be the project that takes ACCUs issued over this huge milestone of 100 million!

Savanna grass and shrub vegetation is highly prone to fire. The Western Australia Department of Agriculture report that greenhouse gases emitted by savanna fires amount to 3% of Australia’s emissions. Savanna burning projects use traditional right-way fire practices to shift the seasonality of fires. Cool burns are carried out in the early part of the season, between January and July, when things are still relatively green, which reduces the potential for more severe fires later in the season. Fewer large fires mean less smoke and less greenhouse gas emissions, and therefore eligibility for carbon credits.

At the 2020 North Australian Savanna Fire Forum, Rohan Fisher of the Darwin Centre for Bushfire Research presented research showing that high emission late dry season fires in north Australia had halved in the last 15 years as a result of early season burning by land managers and said that this approach is ‘recognised as world’s best practice’.

Luke Russ and Robin Dann using a drone to assess the health of north Kimberley country. Photo by Annette Ruzicka.

Promoting Indigenous traditional knowledge as a valuable commodity that contributes to achieving global climate targets is just one of many benefits from this work. There are also opportunities for traditional knowledge to be passed on from one generation to another. The sale of carbon credits provides money that can be reinvested into fire management operations and programs that support elders to train young rangers. At Wilinggin, the credits have been used to reinforce as well as to innovate traditional learning on country, as business development manager Peter Saunders explains:

Something we’ve been focused on recently is investing in technology to help us with the savanna burns and the broader land management activities we’re involved in. Agood example is what we’ve done with Luke Russ, now a qualified pilot who is using his skills and drone technology to help us get a bird’s eye picture of what is happening across country.

Less severe fires also means there is greater security for local communities and precious cultural sites are better protected. There is also growing evidence to suggest that in savanna burn areas, biodiversity improves and weeds and feral animals are discouraged.

Wilinggin Aboriginal Corporation provides a strong example of the benefits of blending traditional knowledge of country with the latest science and technology. 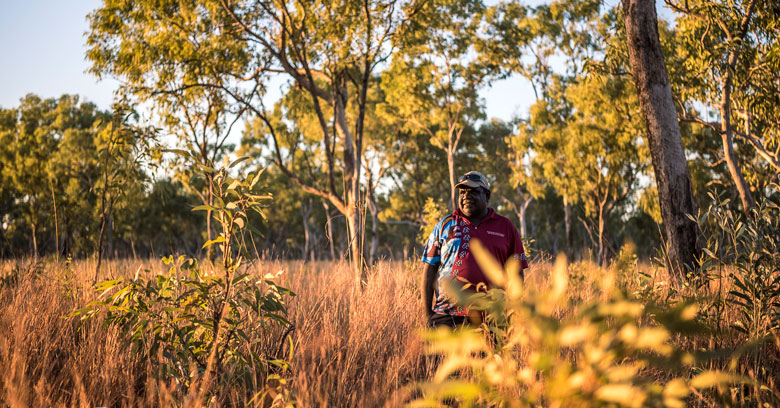