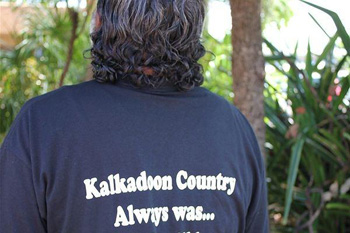 Queensland: The Kalkadoon people will not forget 12 December 2011. On this day patience and fortitude were rewarded when the Federal Court of Australia recognised their native title rights.

‘It’s been a long, hard struggle,’ said Kalkadoon applicant Doug Bruce. ‘This is finally where we wanted to be.’

The Kalkadoon people first lodged their native title claim with the Federal Court in 1994.

The Court’s determination recognises the exclusive and non-exclusive native title rights of almost 40 000 square kilometres of the Kalkadoon people’s traditional homeland. The area is located in north-west Queensland around the mining town of Mount Isa.

In plain terms it means the Kalkadoon people now have exclusive title over more than 4000 square kilometres of their traditional country as well as non-exclusive rights to camp, hunt, fish and conduct cultural ceremonies over the remaining land—an area of well over 33 000 square kilometres. The native title will be held by Kalkadoon Native Title Aboriginal Corporation which registered under the Corporations (Aboriginal and Torres Strait Islander) Act 2006 on 15 November 2011. Its office is in Mount Isa.

It’s been a protracted and complex claim involving the interests of Aboriginal people, pastoralists, miners and three levels of government. Yet the final stage was a show of unity and cooperation. All parties agreed to the historic native title consent determination announced by the Federal Court on 12 December 2011. Hundreds of Kalkadoon people and supporters gathered for the hearing at Mount Isa Civic Centre.

‘The result highlights the strength of the Kalkadoon people and their traditional laws and customs,’ he said.

In another great breakthrough for Aboriginal people, the Queensland state government handed back land rights for more than 80 per cent of Mornington Shire to traditional owners. Mornington Shire is located in the Gulf of Carpentaria and comprises 21 islands.

With the transfer of the land deeds on 7 December 2011, the traditional owners (represented by the Gulf Region Aboriginal Corporation) now have decision-making powers over land use, economic development and care of the natural environment.

The Registrar of Indigenous Corporations, Anthony Beven, said he applauded the recognition of native title claims and returning land rights to traditional owners. ‘It is a cause for celebration,’ he said, ‘and an tangible step forward in closing the gap between Indigenous and non-Indigenous Australians.

Photos:
(top) A member of the Kalkadoon community shows his support for his people’s native title claim. The full slogan reads ‘Kalkadoon country always was …always will be’. Hundreds turned out at the Mount Isa Civic Centre to hear the Federal Court’s determination. Photo: Paul Sutherland/ABC Rural
(above) Mornington Island dancers. A boost in local culture is expected. Photo: Nathalie Fernbach/ABC Rural