So many corporations registered under the Corporations (Aboriginal and Torres Strait Islander) Act 2006 (CATSI Act) are working hard for their communities and achieving results. 'They are a rich and diverse group, all providing opportunities and services in different ways for members,' says the Registrar, Anthony Beven.

The Saltwater Freshwater Arts Alliance Aboriginal Corporation in New South Wales was only incorporated under the CATSI Act in 2010 but has already notched up outstanding achievements and continues to grow in strength and enterprise.

The Saltwater Freshwater Arts Alliance Aboriginal Corporation is based in Coffs Harbour but works hard at both a local and national level to celebrate the living art and culture of communities on the mid north coast. It embraces the people and the land that stretch from Karuah in the Worimi Worimi Nation up the coast to Coffs Harbour in the Gumbaynggirr Nation.  In between lie the Biripi and Dunghutti nations.

'What makes our region unique is the meeting of the saltwater from the Pacific Ocean and the freshwater from the Great Dividing Range,' says Alison Page, the corporation's executive officer.

Through its energetic promotion of Aboriginal art and culture the corporation is laying foundations for long-term social, economic and environmental development. The Registrar supports this aim and, where possible, lends assistance. Last year, for example, the corporation was able to utilise ORIC's LawHelp scheme―LawHelp is a service that gives CATSI Act corporations access to free legal help.

Although the corporation is involved in a multiplicity of activities perhaps its brightest jewel is the hugely popular Saltwater Freshwater Festival which it hosts each year on Australia Day (26 January).  Over 12 000 people attended the inaugural festival held in Coffs Harbour in 2010. Last year it moved to Biripi country in Port Macquarie.

'We put the festival on to celebrate and share our Aboriginal living culture with the wider community and commemorate Australia Day as a positive, inclusive, family day for all communities to enjoy,' says  Alison Page, 'and we like to visit a different location each time.'

The festival showcases the very best Aboriginal talent―in music, visual arts and dance―it is the high spot of the corporation’s year. In many ways it is the culmination of a range of arts and cultural programs undertaken by Saltwater Freshwater over the past 12 months and provides an authentic Aboriginal experience for visitors and local communities alike.

This year the festival was to be in Taree except mother nature had another plan and reluctantly festival organisers had to cancel the day-long celebrations due to extreme wet weather.

'It saddens us greatly to have to cancel this year’s festival due to persistent bad weather,’ said Alison Page on the morning of 26 January, 'but the safety of our artists, audience and crew is paramount.'

Without question the festival will be back next year bigger and better than ever. And there’s no doubt Saltwater Freshwater will continue doing what it does best―promoting Aboriginal art and culture of the New South Wales mid north coast. For more details about its activities visit the corporation’s website at www.saltwaterfreshwater.com.au. 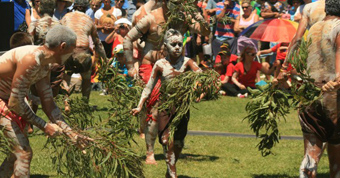