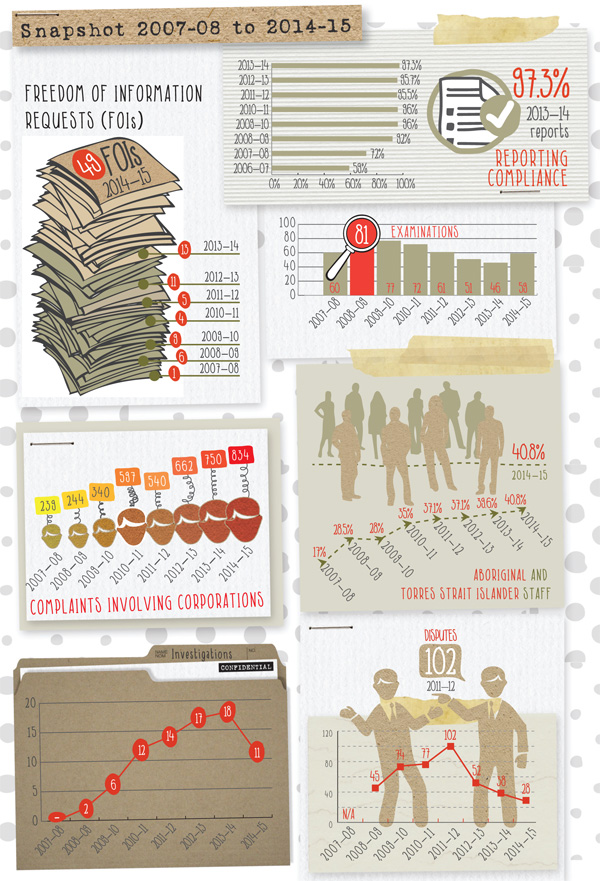 At the end of my second term it is an appropriate time to take stock of achievements, challenges and what the future holds for the Aboriginal and Torres Strait Islander corporate sector in Australia.

It is gratifying to look back over the past eight years and see a sustained upward trend in all ORIC activities—its regulatory functions, services and governance support. Most important though is that these activities have had a positive impact on the sustainability and accountability of Aboriginal and Torres Strait Islander corporations.

The dual focus this year has been on providing more services and greater practical support to the directors and members of corporations. To that end I have extended the ORIC regional network by adding three new regional officer positions, in Darwin, Coffs Harbour and Perth. I have also reduced red tape by making it easier for organisations to transfer their incorporation from state/territory legislation to the CATSI Act.
I have also granted exemptions for reporting and AGMs to corporations in central Australia whose sole purpose is holding land.

Another practical initiative has been the amendment to our pro bono legal scheme, LawHelp, to extend assistance to entities transferring their incorporation to the CATSI Act because of changes to funding from the Commonwealth under its Indigenous Advancement Strategy. LawHelp continues to expand the services provided generously by Australia’s largest law firms embraced by more and more Aboriginal and Torres Strait Islander corporations.

Although there have been several big achievements over the year, the stand-outs came from our enforcement activity. Regulators are judged by how they address wrongdoing and this has been a key priority for my office in recent years. Two important results achieved this year include the following:

These and other successful prosecutions will continue to send a strong message to corporations that breaking the law will not go unnoticed. I can think of no better way to encourage and support the majority of directors and officers of corporations who do the right thing than to go after those that don’t.

With regard to ORIC’s other core business, the section showcasing our highlights clearly charts a year of achievements.

Some challenges and risks

The number of freedom of information requests (FOIs) processed by my office has substantially increased over the past year and there is no indication that the numbers will reduce in 2015–16. The majority of corporation documents are already available free of charge on the ORIC website. But increasingly FOI requests are used in an attempt to access personal and confidential documents of individual corporations rather than information about government.

While it is important to respond thoroughly and promptly to FOI requests in the interests of transparency and open government, it is of growing concern that they present onerous obligations on ORIC’s limited human and financial resources.

Supporting the government’s requirement under the Indigenous Advancement Strategy for most organisations to be registered under Commonwealth legislation has been a priority. In the coming year more resources will be allocated to assist organisations transferring their incorporation to the CATSI Act. The CATSI Act provides many benefits to Aboriginal and Torres Strait Islander corporations and more corporations registered under the CATSI Act will lead to better services for members and clients.

Another big challenge remains managing the requirements to replace or enhance our key IT systems so that we can provide accurate and up-to date information that our clients and stakeholders can rely on.

I would like to thank ORIC staff for their hard work and dedication without which the achievements set out in this yearbook could not have been accomplished. Much of our work involves travelling long distances, facing challenging situations and dealing with uncertainties. I am convinced that our outcomes reveal the level of commitment that each and every staff member has for the work they do and the clients they serve.

We remain committed to delivering high-quality products and services to encourage Australia’s first peoples to achieve self-determination, economic growth and to make the most of their resources.