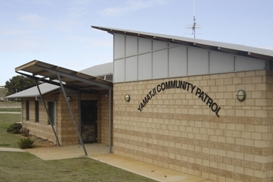 Geraldton lies on the beautiful west coast about 400 kilometres north of Perth. Yet scratch the surface and, like many mid-size Australian towns, Geraldton is grappling with its fair share of social issues. Difficulties stem from a lack of employment opportunities and high levels of youth disaffection. This is the experience for many among both Geraldton’s Aboriginal and non-Aboriginal population.

Finding answers is not easy but the Geraldton Yamatji Patrol Aboriginal Corporation— known locally as the community patrol—is doing exactly that. Since it was established in 1993 it’s been making a difference alleviating some of the town’s most entrenched social issues.

Comprising a dedicated handful of locals and supported by community volunteers, the patrol is an integral part of daily life. It plays a vital role in keeping the peace, reassuring residents and generally making Geraldton a safer place for everyone.

At its heart, the Geraldton Yamatji Patrol Aboriginal Corporation promotes mutual understanding and respect between Aboriginal and non-Aboriginal people, and members of the police force. It also administers welfare and provides assistance to those in need. Children and young people are a particular focus—for example, the patrol works hard to combat child truancy and helps juveniles with drug and alcohol problems. Its tack is to create alternative models for dangerous and anti-social behaviours, and to instil a sense of personal pride and self worth.

Charmaine Yeates, a dedicated member of the patrol for many years, says it is worrying that more people are coming to Geraldton seeking help. ‘As services in outlying areas close down more people come into town—but then they are homeless and find it difficult to connect to any support. And then they run into trouble.’

The Yamatji community patrol is funded through the Western Australian Department of Indigenous Affairs and is overseen by a board. It has premises on land that was once known as ‘Blood Alley’—the same place, in fact, where Charmaine can remember living in a tent as a little girl. ‘We’ve come a long way since those harsh days,’ says Charmaine. Today the same land supports modern facilities, including a sobering-up centre funded through the state’s Department of Health.

No story about the Yamatji patrol is complete without a mention of Sergeant Kevin Bennett who headed up the domestic violence unit of the local police force. ‘He is great,’ says Charmaine. ‘He helped the patrol to lobby for funds and to obtain land. He saw the need.’  Sergeant Bennett still lives in Geraldton and remains close to the community patrol.

Over the years a great deal has been achieved—and continues to be achieved—by a small band of dedicated workers. From humble beginnings the Geraldton Yamatji Patrol Aboriginal Corporation has assumed a place of great strength and respect within its community.