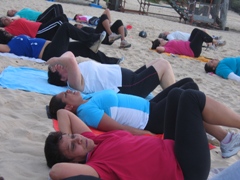 It all began in early 2009 when Noelene Skinner and her sister Fiona Hyland tried out for The Biggest Loser TV program.

They just missed out on selection so decided to do it for themselves, setting up a 10 week program and inviting other Indigenous women in the Coffs Harbour area to join them.

‘We sent out an email to see who might be interested and were just overwhelmed by the response,’ said founder and project coordinator Noelene Skinner. Together, the group of 32 women lost 27 kilos over the 10 weeks. ‘It was amazing we lost so much weight.’

Noelene and Fiona had struck a cord. Today there are 54 members ranging from 16 to 64 years. The key to their success is having a lot of fun.

‘It’s very sociable. It’s not hard core like in a gym. We support each other, we talk about diet and food and generally try to live a more healthy life.’

Along the way they are addressing major health issues.

‘One lady who is insulin dependent has lost over 20 kilos,’ Noelene said. ‘If she loses another 10 kilos, she won’t have to continue using insulin. That’s amazing!’

While waistlines decrease, success stories and the corporation itself grows ever bigger.

Last year the DSGAC ran a full program—aqua aerobics, jetty walks, cardio and circuit classes and one-offs like pole dancing and circus skills—and will do so again in 2011.

‘Our goal is the 2011 City to Surf held in Sydney in August. We’re about to start training and we’ll have a schedule together to prepare us for the big race, so we’re all very excited.

‘We did the five kilometre walk at Parramatta Park last year to raise funds for dementia and when we first started getting ready for that, half the group couldn’t even get around the oval. Now most of us can jog it.’

Noelene is quick to credit personal trainer Vicki Tillott who has been with the corporation for just over 12 months. She, in turn, is full of praise for ‘the girls’.

‘They blow me away,’ Vicki told Spotlight On. ‘They’re just so inspiring.

‘I hear them say, “I want to be healthy so I can be here for my children and set a good example,” and they talk about how they don’t want to die young and want to get off medication and be healthy.

‘They have so much passion and not just for themselves but for the other women in the community. They constantly motivate each other and it gives me tingles up my spine. I feel so privileged to be working with them.’

DSGAC is now facing a challenge common to many other corporations—how to deal with sudden growth.

‘It started as a little hobby of ours and then just got bigger and more full-on,’ says Noelene. ‘We didn’t mind because we love doing it, especially with the widow ladies who are often on their own. But we’ve had to learn a lot.’

‘We didn’t have any governance training so Christian has been a big help and we are thankful for that. If we have any problems we just give him a call and he’s always there for us.

‘There’s also a lot of useful information on the ORIC website that is easily accessible and that’s been great too.’

The Deadly Sista Girlz Aboriginal Corporation recently won the Grace Roberts Award for community organisations and a 2010 NSW Premiers Award. As it continues to inspire and change lives there are bound to be more accolades.

And the best tip to help others improve their health and keep to those New Year resolutions? Noelene and Vicki are in agreement.

‘Make sure you support each other and, importantly, have fun!’

Photos:
Founder and coordinator Noelene Skinner (green t-shirt) shows her pushup skills. Other photos: Members of the Deadly Sista Girlz Aboriginal Corporation make the most of Coffs Harbour's natural environment to get fit and have fun.