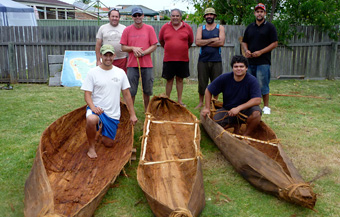 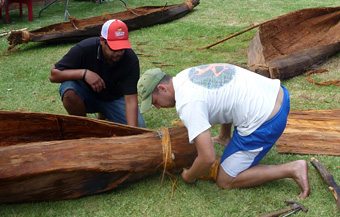 Thanks to a grant provided by the Australian National Maritime Museum, local Aboriginal men had the opportunity a short time ago to join a two-day workshop run by Budamurra Aboriginal Corporation to learn the lost art of canoe making.

The maritime museum’s curator David Payne has been researching Australian Aboriginal and Torres Strait Islander watercraft for some time. He was only too pleased to come down from Sydney to share his knowledge and recent experience building first a model and subsequently a full-size tied-bark canoe. ‘This was a fantastic chance for me to put my theoretical and practical knowledge into action, and to learn more from the other participants,’ he said.

The first job was to fell four stringy bark trees from nearby Boyne State Forest and take the peeled bark to a creek to soak overnight. With permission from Forests New South Wales employees Paul Carriage (cultural heritage officer) and Dave Mills (field officer) were able to carry out these tasks during working hours. In a further show of support for the canoe project, Forests New South Wales allowed the men to use the forest’s tipper truck to transport the bark to the grounds of Ulladulla Local Aboriginal Land Council—Budamurra’s workshop site.

With the arrival of the bark the canoe building could begin. Following instructions recorded and illustrated in reports dating from the late 18th century and early 19th century, workshop participants got on with peeling back four-metre sheets of bark. ‘What we had to do according to the most detailed report was to invert the bark so the inside of the tree became the outside of the canoe,’ explained David Payne.

Then followed the difficult and laborious process of scraping off loose exterior bark to get to the firm, tightly-woven fibres that lay beneath and which give the tied-bark canoe its strength and form. Once this was achieved the ends of the bark sheets were warmed on an open fire. This was to encourage greater flexibility for folding and so the sheets could be tied at the ends with ‘wet strips of bark lashed together’—the final step.

The workshop was two full days of hard work and total engagement—a challenge in anyone’s book but thoroughly rewarding. ‘The historical information while clear on concept is short on detail,’ said David Payne, ‘so of course we made mistakes—you would expect that—but with each one came new learning and understanding.’

As the group proceeded it gained greater confidence manipulating the bark. ‘We started to recognise its qualities and how to take advantage of those qualities using different techniques. It was an invaluable experience,’ said Paul Carriage who is also a member of Budamurra Aboriginal Corporation.

And at the end of the two days the workshop produced three authentically-built tied-bark canoes—a tremendous feat which the men hope will ‘re-establish a vital piece of Aboriginal culture that has been missing for a number of generations’.

Paul Carriage explained that the techniques used at Budamurra have been lost for about 150 years. In the 19th century local tribes used canoes in local lakes and estuaries as well as off the Ulladulla coast when seas were calm. Made from local stringy bark the canoes could be up to six metres. Women fished out of them using hooks and line made from bark string or hair.

It is heartening that through Budamurra Aboriginal Corporation a rich cultural tradition has been revived and now can be passed on.