Katherine, Northern Territory:  It’s only been a few months since the Garden of Reflection and Healing was opened at the Katherine Museum but already visitors are benefiting from its soothing effect.

The idea for the garden came from the members of the Katherine Region Stolen Generations Aboriginal Corporation (KRSGAC). They also decided that its official launch should coincide with National Sorry Day on 13 February 2016. ‘The garden is a beautiful creation—we want as many people as possible to visit—but we’d also like acknowledgment that it rises from a dark time in our history, a time that caused a great deal of pain and sorrow for our people,’ said Natalie Ellis, the corporation’s contact person.

The Katherine Museum is situated on the old aerodrome which formally closed in 1975. Its main display area has been reconstructed from the shell of the old passenger terminal and air radio building. Totally transformed, it now houses a variety of interesting objects, including precious Aboriginal artefacts, World War II memorabilia and a large collection of fascinating photographs and records.

The area around the museum is expansive and already boasts a community garden planted with magnificent cycads and other such plants familiar to the Katherine region. There is also a large rock formation of significance to the Dreamtime that tells a story of a kangaroo resting on the way to Katherine Gorge.

‘We’ve been thinking about creating the Garden of Reflection and Healing for a long time,’ said Natalie. ‘Our story is always with us and has a profound effect in our everyday lives. The fact that Aboriginal children were once removed from their families and their communities is something that Katherine residents and visitors ought to know more about.’

It’s not comfortable history. Many visitors will be challenged and upset by what they learn from the displays, both inside the museum and around the garden, but until this part of Australia’s past is fully acknowledged, it’s not possible to move on and grow—either as a nation or as an individual.

‘You would be surprised at just how many people in this town identify as stolen generation,’ said Natalie.

The extremely personal project took almost a year to complete—if indeed it is complete. The garden is expected to be an ongoing, ever-changing project where other native plants can be added, including bush medicine varieties.

At some point KRSGAC also hopes to provide spaces for individual stories to be displayed. It’s likely to happen. The project is strongly supported by the Katherine Town Council, the Katherine Museum, Katherine Region Aboriginal Health and Related Services, and the Healing Foundation—and it has got off to a very promising start.

‘I’d like to encourage everyone to come to the Katherine Museum,’ said Natalie. ‘Members of our corporation want people to learn more about the stolen generations and also to reflect on what that really means for hundreds and hundreds of our people who are part of that group. This is what the garden is about—a place of tranquillity for quiet reflection and healing.’ 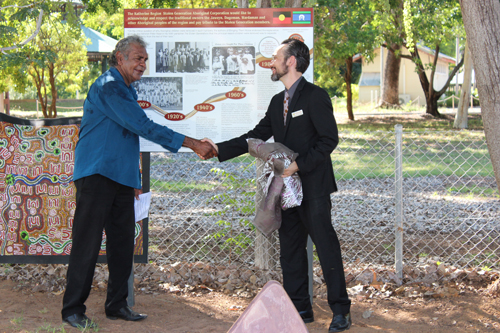 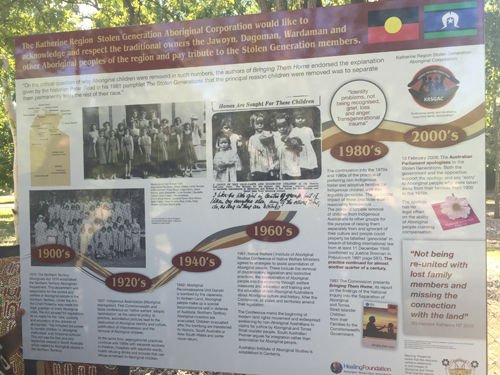 The outside information board up close. Photo: Natalie Ellis 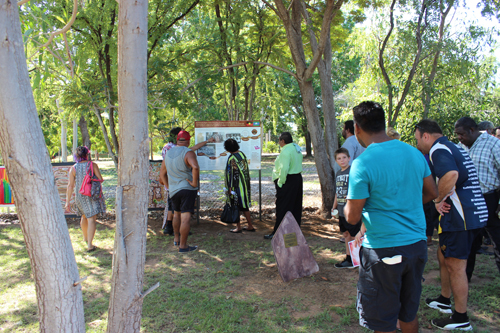 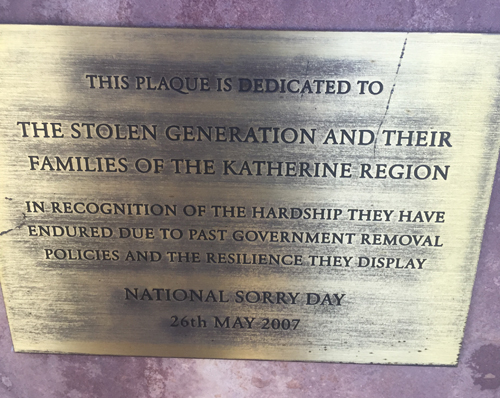 Close up of the brass plaque. Photo: Natalie Ellis 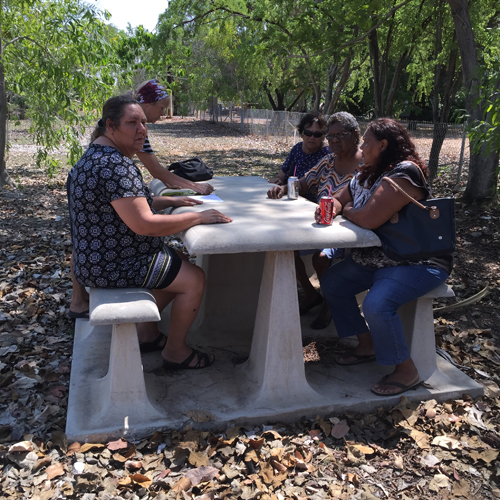 Early days in the garden’s development. ‘The table was the first thing to arrive and we worked on it from there,’ said Natalie Ellis. Photo: Natalie Ellis